BARRY GOODSON served in the Marine Corps in Vietnam from 1968-1969 near ChuLai, Vietnam. His primary service was as an Assistant Squad Leader in his CAP unit. Other duties included machine gunner and squad leader of Alpha guns/Alpha Company. He received a Naval Achievement Medal with Valor and a Purple Heart.

Goodson currently serves as a sheriff’s deputy in Parker County, Texas, where he has patroled 1000 square miles investigating criminal cases, apprehending criminals, serving as community relations and media relations officer, and crime watch coordinator, among other services. At 6’3”, 210 lbs., Goodson looks like a Texas Sheriff ought to look. He was named Patrol Officer of the year in 1994. Born, raised and schooled in Fort Worth, Texas, he is a graduate of Texas Christian University. 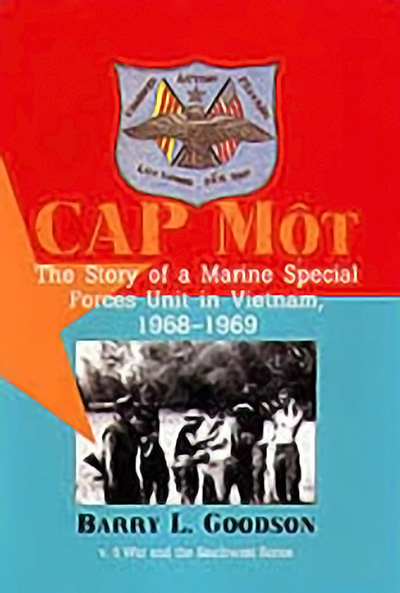 — Vol. 5: of War and the Southwest Series

The Marines’ Combined Action Platoon program—CAP—was one of the most innovative approaches to pacification used in Vietnam. From experience in other civil wars in Haiti, Nicaragua, and the Dominican Republic, the Marine Corps believed that firepower alone would not subdue the enemy, that the people had to be won over. Consisting of a volunteer rifle squad, a Navy medical corpsman and a locally recruited platoon of Popular Forces (PF), the CAP lived among the villagers 24 hours a day for the express purpose of protecting and helping them to survive the dangers of their enemies. They also were to help them improve their health and their daily lives. more... about CAP Mot: The Story of a Marine Special Forces Unit in Vietnam, 1968-1969