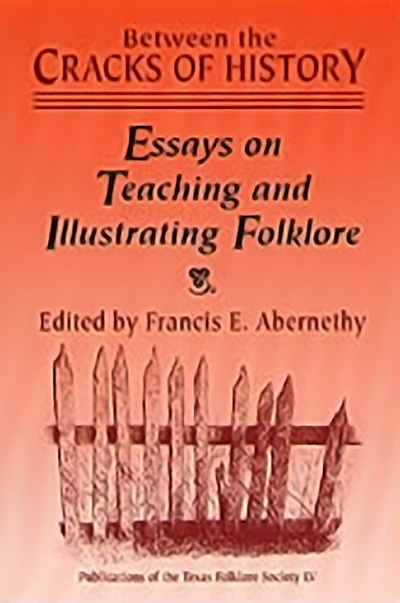 Between the Cracks of History: Essays on Teaching and Illustrating Folklore

About Abernethy's Between the Cracks of History

Between the Cracks of History: Essays on Teaching and Illustrating Folklore is now available as a free e-book at the UNT Digital Library and The Portal to Texas History.

“This program on folklore pedagogy comes to you by popular demand. In an effort to define folklore at a meeting twenty-five years ago, after all the academic verbiage that generation of pedants flung about, Martha Emmons rose up in her tutorial majesty. She disgustedly looked at the members and the complicated mountain we had made out of a simple mole hill and said, ‘Folklore is what the word says it is! Folk is the people and lore is the learning. It is the learning of the people.’ And that is pretty close.” —Francis Edward Abernethy

“Conjuring up images of rural folk gathered around a washpot, cookstove, hog killing, horse trade, fish net, or quilting bee means folklore to many casual observers… and they’re usually right. Folklore is a simple thing to understand when you consider that ‘lore’ can be just about anything important enough to the ‘folk’ to be shared and passed down within the group. Whether it be a… family sausage recipe, a special catfish bait, a song from the old days, a hunting story, a family quilt… folklore exists only if it is deemed important enough to be passed along to others.” —Rhett Rushing

Essays on teaching and defining folklore for students: “How I Define Folklore for My Students,” “Toward a Definition of Folk Culture,” “Beginning Within: Teaching Folklore the Easy Way,” “Folklore Fieldwork on the Internet,” and others. Essays illustrating folklore:”The Honored Dead: The Ritual of Police Burial,” “Gang Graffiti,” “Rail Tales: Some Are True,” “Dance Halls of East Texas,” “The Oil Field Camp,” “Tex-Mex Dialect or Gidget Goes to Acuna,” and more.

Between the Cracks of History: Essays on Teaching and Illustrating Folklore