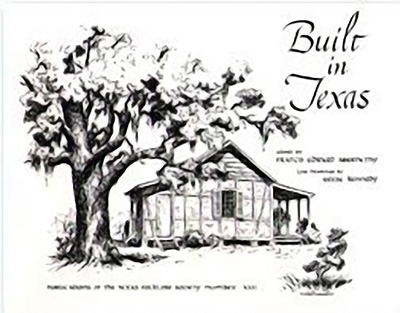 About Abernethy's Built in Texas

Built in Texas is now available as a free e-book at the UNT Digital Library and The Portal to Texas History.

A book of folk building in Texas, ranges across the state in word and photograph to explore the building by settlers who tarried on the timbered lands of East Texas and built with the readily available pine logs in the traditions of their fathers. Those in the Western Cross Timbers used oak; European migrants into Central Texas stacked rocks into houses in the fashions learned in the Old Country. West Texans of the Pecos, who had neither rocks nor logs to build with, mixed mud and grass, made adobe brick, and built in traditions borrowed from the Mexican-Indian population already settled there. These were the folk, building out of the environment, wasting nothing, building forms to suit their needs. Germans, Poles, Norse, and Alsatians coming straight from the Old World with their countries’ ways of building in mind had to adapt to the new materials and learn from the older Anglo settlers the methods of putting the materials together.

“In folk building, a man takes whatever materials he has at hand—logs, rocks, sometimes the very earth itself—and he builds with those materials whatever it takes to survive. The methods he uses to shape his log or thatch his roof are those he learned from his forefathers or from the people he has lived among. The forms that he shapes, whether they are barns or fences or stock tanks, are those that satisfy not only the immediate needs for which they are built, but also satisfy what the eye has been conditioned by his culture to see as beautiful.” —Francis Edward Abernethy

Built in Texas is divided into Methods and Materials; Style and Form; Barns and Outbuildings; Gates and Fences; Holding Water; Restoration and Preservation.