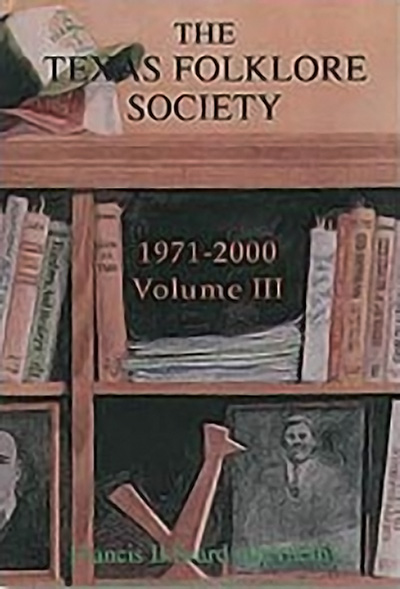 The Texas Folklore Society, 1971-2000: Volume III is now available as a free e-book at the UNT Digital Library and The Portal to Texas History.

The three volumes of the Texas Folklore Society’s history were the result of Jack Duncan and John West requesting that all the Society’s programs be published in a volume. They wanted to know what folklore topics members had been interested in and talking about since the first TFS gathering in 1909. Abernethy set the TFS secretary to typing up all past TFS meeting programs and contents of Society publications.

Abernethy gathered information about the Society and soon had enough material to make a good entry for each year. Then Abernethy read Leonidas Payne’s description of the seminal meeting between Payne and John Lomax, which was so vivid that Abernethy was caught up in the social history of the times. These were the settings in which the meetings that Duncan and West were interested in took place. Abernethy also collected pictures and early illustrations to augment the writing. Thus the project turned into three volumes, with Volume I covering the years 1909-1943 and Volume II 1943-1971.

In 1999 the Society looked back on its ninety years and saw that it was still strong. It has met annually since 1909, except when interrupted by wartime. It has collected, presented, and preserved more folklore than any other similar society in the United States. It has amassed a list of publications in Texas folklore that compare favorably with collections throughout the United States. It has brought to Texas and sent out from Texas some of the leading folklorists of the nation. And large numbers of the Society’s members continue to gather annually to honor and enjoy the traditions of Texas.

The final volume begins with the move from Wilson Hudson’s editorship at the University of Texas to F. E. Abernethy’s editorship at Stephen F. Austin State University: “We moved during the burnt-out end of August, Wilson and I… We sweated and cussed some as we packed the Society’s materials in cardboard boxes and carried them out to the station wagon parked behind Parlin Hall. We took down the pictures of Lomax and Payne and Thompson and some Cisneros sketches… Frank Dobie’s old felt hat with a turkey feather in the band was sitting on a filing cabinet, so we put it in. Very gently we loaded a box of Mody’s paisanos, five or six of them… And the Society’s publications… that stretched back to Stith Thompson’s Volume I in 1916 and make up our umbilicus, the visible chain of the Society’s being, that makes us all a part of it from its inception in 1909.”