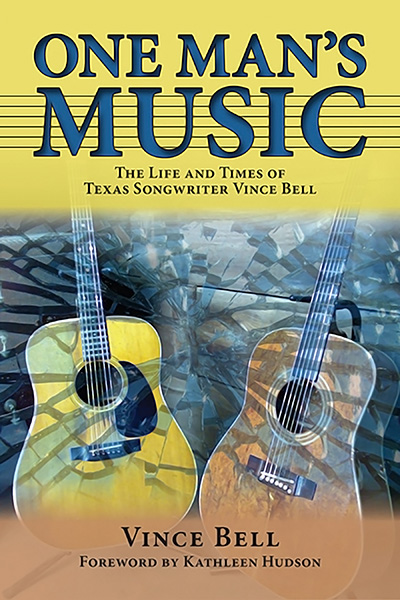 One Man's Music: The Life and Times of Texas Songwriter Vince Bell

About Bell's One Man's Music

Texas singer/songwriter Vince Bell’s story begins in the 1970s. Following the likes of Townes Van Zandt and Guy Clark, Bell and his contemporaries Lyle Lovett, Nanci Griffith, and Lucinda Williams were on the rise. In December of 1982, Bell was on his way home from the studio (where he and hired guns Stevie Ray Vaughan and Eric Johnson had just recorded three of Bell’s songs) when a drunk driver broadsided him at 65 mph. Thrown over 60 feet from his car, Bell suffered multiple lacerations to his liver, embedded glass, broken ribs, a mangled right forearm, and a severe traumatic brain injury. Not only was his debut album waylaid for a dozen years, life as he’d known it would never be the same.

In detailing his recovery from the accident and his roundabout climb back onstage, Bell shines a light in those dark corners of the music business that, for the lone musician whose success is measured not by the Top 40 but by nightly victories, usually fall outside of the spotlight. Bell’s prose is not unlike his lyrics: spare, beautiful, evocative, and often sneak-up-on-you funny. His chronicle of his own life and near death on the road reveals what it means to live for one’s art.

“This is the story of a man and his instrument; of good times and bad, and the damage sustained and survived by both through decades of hard use.” —Richard Dobson

“All music lovers and those who love autobiography and music history will be interested in One Man’s Music. I would definitely want this book in my library, and I have a library of music books!” –—Kathleen Hudson, author of Telling Stories, Writing Songs

“Vince Bell sees with the focused eye of a poet and listens with the sensitive ear of a seasoned musician. His understated and elegant writing connects like a live wire, showering the reader with the sparks of his unique experiences and shedding light on the struggles and pleasures of a traveling troubadour who endures the most bitter twists and turns, survives, and prevails.” —Robert Earl Hardy, author of A Deeper Blue: The Life and Music of Townes Van Zandt

Texas singer/songwriter VINCE BELL’s songs have been performed and recorded by such diverse talents as Little Feat, Lyle Lovett, and Nanci Griffith. In addition to releasing five critically acclaimed albums of his own, a ballet has been set to his work and his story turned into a musical. He lives in Santa Fe, New Mexico, with his wife Sarah Wrightson.

One Man's Music: The Life and Times of Texas Songwriter Vince Bell