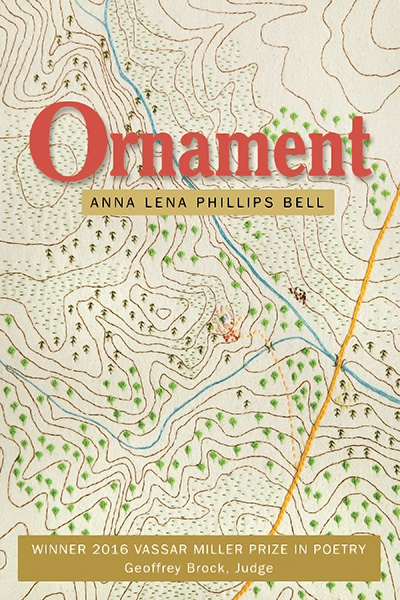 In this debut collection, Anna Lena Phillips Bell explores the foothills of the Eastern U.S., and the old-time Appalachian tunes and Piedmont blues she was raised to love. With formal dexterity—in ballads and sonnets, Sapphics and amphibrachs—the poems in Ornament traverse the permeable boundary between the body and the natural world.

Cries of katydids make a pool of sound,
filling up the invisible bowl of night, whose
sill you rest on, spelled by stars’ faint light.
Now the pestle moon will grind your troubles
down to thinnest powder against the grooves of
those coarse cries, and now a chirring wind sends
trials to pasture, scatters them past the fence.

“Anna Lena Phillips Bell makes a stellar debut in her Vassar Miller Prize-winning volume of poems, Ornament. Her formal virtuosity and luscious wordplay have the lightest of touches. The poems feel as if a winged being brushed by, leaving her readers subtly changed. Whether she’s writing about slugs mating or wasps returning to a nest destroyed, she is in sync with the wild world, yet burnished by love. Her love poems are written in the almost shocked realization that the poet, a child of the Piedmont with country songs in her head, can both revel in nature and have her own nature recognized by another. “Ornament,” the title poem, is just such a cry of satisfaction and wonder. That tiny lyric tour de force is a whirlwind; I hope it will be anthologized and shared for its exuberance and memorable dazzle. If a secret garden had a chance to speak, might it be in the voice of Anna Lena Phillips Bell? Ornament is a stunning book, gossamer and untamed.” —–Molly Peacock, author of The Analyst

“Brilliantly melding influences from Blues and Appalachian music to Dickinson and Frost, the adept, bold poems of Ornament offer praise and homage to the beleaguered, beautiful environments of the American southeast and of a poet’s soul. This is the kind of carefully built and deeply understood poetry that engages experience in a transformation so thorough it becomes kinetic, changing our felt sense of how the world moves. Thank you, Anna Lena Phillips Bell, for ringing out your clear-toned, beautifully tempered sound to the skies.” —–Annie Finch, 1990 winner of the Robert Fitzgerald Prosody Award

“Ornament is a kind of tribute album. The poet, who is also an banjo player, pays tribute in many poems to the old-time music of the Piedmont region of North Carolina. And like the songs you’ll find in the discography at the back of the book, the poems are marked by bursts of lyric beauty, clever storytelling, and haunting set pieces. Ornament is also a personal tribute to the Piedmont landscape that shaped that music, and Phillips Bell evokes that landscape and the flora and fauna that inhabit it with the keen eye and the passion of a modern-day Bartram. Finally, the poet’s love of old-time music is matched by her love of old-time prosody, and Ornament is, too, a tribute to the music-making forms of our poetry, of which these pages offer an astonishingly rich catalog. If you keep an eye out, as Auden hoped his ideal reader would, for “curious prosodic fauna,” you’ll find ballads and sonnets, blank verse and terza rima, sapphics and amphibrachs, as well as the occasional ghazal, pantoum, sestina, rondeau, and rondelet. And in this picker’s hands, those old tunes all sound gloriously new.” —–Geoffrey Brock, author of Voices Bright Flags and judge

Ornament is a recommended text for use in classrooms where the following subjects are being studied: Creative Writing, Literature, and Poetry.

In this debut collection, Anna Lena Phillips Bell explores the foothills of the Eastern U.S., and the old-time Appalachian tunes and Piedmont blues she was raised to love. With formal dexterity—in ballads and sonnets, Sapphics and amphibrachs—the poems in Ornament traverse the permeable boundary between the body and the natural world. “Ornament is a kind of tribute album. The poet, who is also a banjo player, pays tribute in many poems to the old-time music of the Carolinas, and like the music, her poems are marked by bursts of lyric beauty, deft storytelling, and haunting set pieces.” —Geoffrey Brock, author of Voices Bright Flags and judge

Anna Lena Phillips Bell’s poems have appeared in the Southern Review, 32 Poems, and Poetry International. The recipient of an NC Arts Council Fellowship, she teaches at UNC Wilmington and is editor of Ecotone. She lives with her family near the Cape Fear River.