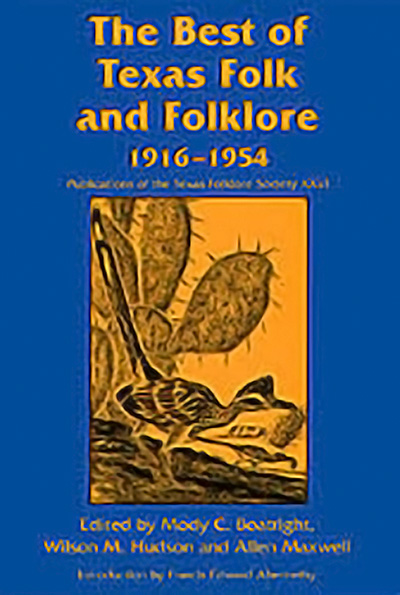 The Best of Texas Folk and Folklore: 1916-1954 is now available as a free e-book at the UNT Digital Library and The Portal to Texas History.

The state of Texas is fortunate in possessing a rich and varied folklore. When white settlers from the Old South came in bringing their African slaves, they found the Mexicans in possession, and before them there were the Indians. These four racial groups maintained their separate identities, languages, religions, and cultures, making their folkways and folklore distinct and characteristic. This volume is composed of materials published originally in the first twenty-five volumes of the Texas Folklore Society.

“Those old annuals are filled with real, field-collected folklore… Most of that early collected folklore had never been in print before… The Society retrieves it this year because… at this near-century mark we wish to have under one cover the best folklore in Texas from the first half of the twentieth century.” —F. E. Abernethy, from the Preface

Asthma—Go down to the river and catch a frog. Pry open the frog’s mouth and blow your breath into it. This must be done before daylight in the morning. The frog will die before sundown, but the asthma will go into the frog and will never bother the sufferer again.

Colds—For colds and croup goat tallow is a good remedy. The Indians used a decoction of the leaves of the horehound to cure colds. Red chili peppers, swallowed whole like pills.

Among Mexicans susto is a condition brought about by shock or fright.