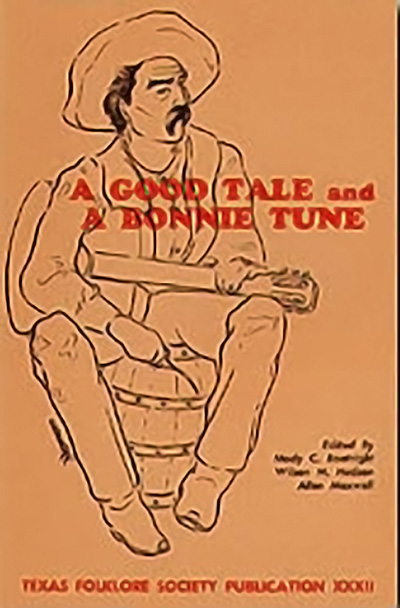 A Good Tale and a Bonnie Tune

About Boatright et al.'s A Good Tale and a Bonnie Tune

A Good Tale and a Bonnie Tune is now available as a free e-book at the UNT Digital Library and The Portal to Texas History.

“A good tale tell’t well, an’ a bonnie tune… and ye’ve a rare song. And fa widna sing it?” So said a Scotswoman, explaining what a ballad of American Indians and Texas Rangers was doing in the repertory of a Scottish traditional singer.

The quotation furnishes a particularly appropriate title for this collection of Texas folklore, which features a symposium on “Folksong and Folksong Scholarship” by five men eminent in the field of folk music. Exploring changing approaches and attitudes in his exciting area of folklore are Tristram P. Coffin, secretary-treasurer of the American Folklore Society and author or editor of a number of books; John Greenway, editor of the Journal of American Folklore; W. Edson Richmond, editor of Midwest Folklore and teacher of courses on the ballad at the University of Indiana; D. K. Wilgus, author of Anglo-American Folksong Scholarship Since 1898; and George Foss, enthnomusicologist and member of the National Symphony Orchestra in Washington, D. C.

Good tales are represented in this volume by Frank Dobie and by Riley Aiken. Folklore in its travels is studied by Roger Abrahams, and Kenneth Goldstein. E. Bagby Atwood analyzes the variations of the cacophonous custom of the charivari or shivaree as it has been observed in different times and regions. George D. Hendricks compares versions of the origin and nature of woman, and John Q. Anderson surveys origins of stream names, among other topics covered in this volume.

A Good Tale and a Bonnie Tune