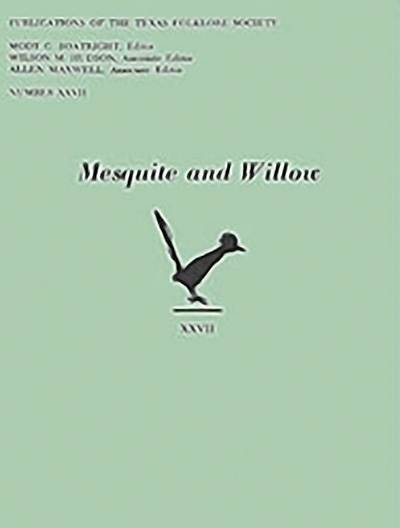 Mesquite and Willow is now available as a free e-book at the UNT Digital Library and The Portal to Texas History.

The title of this book alludes to two branches of folklore that exist side by side in Texas, the English and the Mexican. The English tradition is symbolized by the willow and the Mexican by the Mesquite. Mezquite is the Spaniards’ approximation of Nahuatl mizquitl, and of course Mexican folklore contains a mixture of Spanish and Indian elements.

The mesquite and the willow both grow in Texas, but the mesquite has a much wider range because it can live in dry country. Mesquite belongs mainly to that part of Texas where the Mexican influence was the strongest, the country below San Antonio once occupied by Spanish and Mexican ranchers who traced their land titles back to grants made by the king of Spain.