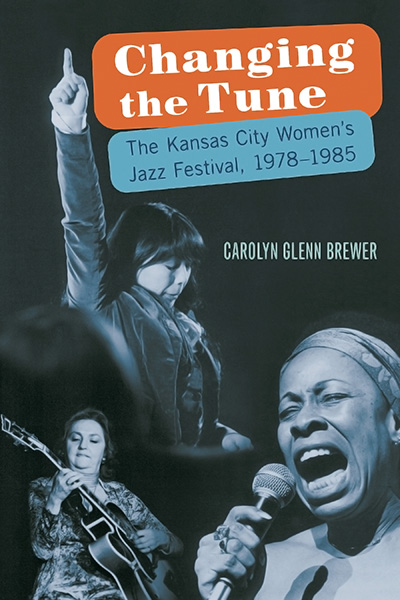 About Brewer's Changing the Tune

But with success came controversy. Anxious to satisfy fans of all jazz styles, WJF alienated some purists. The inclusion of male sidemen brought on protests. The egos of established, seasoned players unexpectedly clashed with those of newcomers. Undaunted, Comer, Gregg, and WJF’s ensemble of supporters continued the cause for eight years. They fought for equality not with speeches but with swing, without protest signs but with bebop.

For the first book about this groundbreaking festival, Carolyn Glenn Brewer interviewed dozens of people and dove deeply into the archives. This book is an important testament to the ability of two friends to emphatically prove jazz genderless, thereby changing the course of jazz history.

“In Carolyn Glenn Brewer’s book, Changing the Tune, we get to experience a well-documented account about the many notable women who lent their voices to the world of jazz. Thank you for helping to erase the stigma women musicians experience by exposing this inspiring organization and its contributions to women in music.” —Ellen Johnson, vocalist, producer and author of Jazz Child: A Portrait of Sheila Jordan

CAROLYN GLENN BREWER is a longtime music educator who has written for Jam Magazine and published two books on the 1957 tornado in Ruskin Heights, Missouri. She has played clarinet in bands, chamber groups, and orchestras throughout the Kansas City area. She lives in Kansas City.