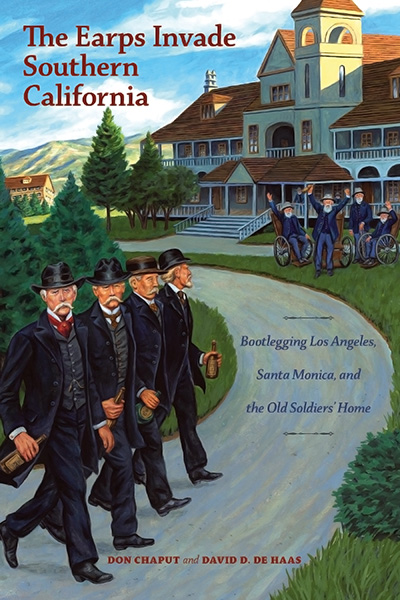 About Chaput and De Haas's The Earps Invade Southern California

Most readers of the Wild West know Wyatt Earp, Virgil Earp, and Morgan Earp for the famous shootout on the streets of Tombstone, Arizona. But few know the later years of the close-knit Earp family, which revolved around patriarch Nicholas Earp, and their last push at a major monetary coup in Los Angeles.

By 1900 a newly established Old Soldiers’ Home was in place at Sawtelle (between Santa Monica and Los Angeles), with thousands of veterans earning monthly pensions, but in an environment where alcohol was prohibited. Enter the Earps and their “blind pig” (illicit alcohol sales) scheme. Two of the Earps, Nicholas and son Newton, were enrolled in the Soldiers’ Home, and Newton’s far more famous half-brothers Wyatt and Virgil showed up from time to time, but the star of the operation was older brother James.

Booze would flow, the pension money would be “dispersed about,” and jails were sometimes filled, as the Earps and several other men on the make competed for the veterans’ money. We are also reintroduced to Old West figures such as “Gunfighter Surgeon” Dr. George Goodfellow, “Silver Tongued Orator” Thomas Fitch, millionaire George Hearst, detective J.V. Brighton, Lucky Baldwin, and many other well-known westerners who touched the lives of the Earps.

DON CHAPUT is the author of Virgil Earp: Western Peace Officer; The Earp Papers: In a Brother’s Image; and co-author of Cochise County Stalwarts: A Who’s Who of the Territorial Years. He lives in Pasadena, California.