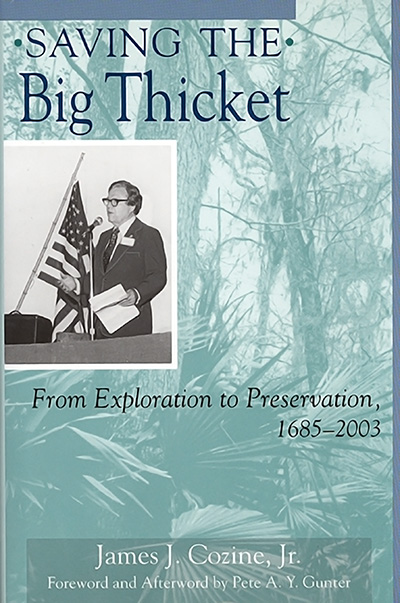 Saving the Big Thicket: From Exploration to Preservation, 1685-2003

About Cozine's Saving the Big Thicket

Saving the Big Thicket: From Exploration to Preservation, 1685-2003 is now available as a free e-book at the UNT Digital Library.

The Big Thicket of East Texas, which at one time covered over two million acres, served as a barrier to civilizations throughout most of historic times. By the late nineteenth century, however, an assault on this wilderness by settlers, railroads, and timber companies began in earnest. By the 1920s, much of the wilderness had been destroyed. Spurred on by the continued destruction of the region, the Big Thicket Association (BTA) organized in 1964 to fight for its preservation. Arguing that the Big Thicket was a unique botanical region, the BTA and their supporters convinced President Gerald Ford to authorize an 84,550-acre Big Thicket National Preserve in 1974.

Saving the Big Thicket is a classic account of the region’s history and a play-by-play narrative of the prolonged fight for the Big Thicket Preserve. It is a clearly written case study of the conflict between economics and preservation, presenting each side with objectivity and fairness. Originally written by Cozine in 1976, it has been updated with a new afterword by Pete A. Y. Gunter.

“Cozine was on the scene while smoke from the big battle still hung in the air, talking to both conservationists and timber industry people.” —Thad Sitton, author of Backwoodsman

JAMES J. COZINE, Jr., received his doctorate from Texas A&M University in 1976. He is a veteran of the U.S. Air Force and, since 1983, the director of Educational Talent Search at the University of Louisiana at Monroe.

See all titles in our Series: Temple Big Thicket Series

Saving the Big Thicket: From Exploration to Preservation, 1685-2003