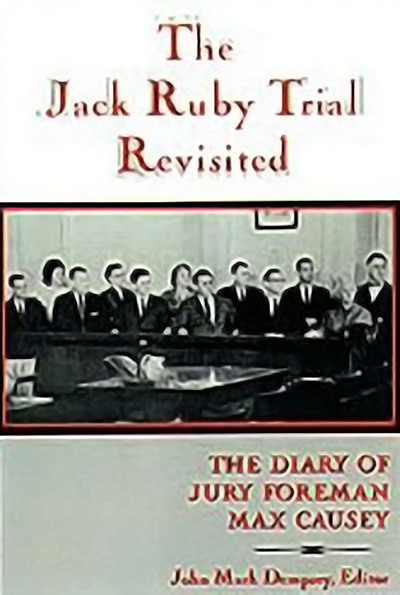 “The Carl Sandburgs of the future will spend whole lifetimes trying to analyze the drama of this week and this scene. What it all comes down to—after the assassination of a president, the wounding of a governor, the slaying of a policeman, and the killing of a man nobody really knew—is little Jack Ruby.” —Syndicated columnist Dorothy Kilgallen, February 1964

“All of this publicity that we were getting was a little exciting but it was far more frightening. Everyone concerned with the security of the jury felt that no good could possibly come from this much exposure of the jury to the public. Later on, many of us were to better understand this.” —Max Causey, Jury Foreman

This was the cauldron into which twelve exceptional and ordinary people were thrown in the winter of 1964, just three months after the public murder of a president only blocks away, followed two days later by the televised killing of his apparent assassin. The first juror selected, and the eventual foreman of the jury, was Max Causey, a thirty-five-year-old administrative engineer with Ling-Temco-Vought. More than the other jurors, Causey was caught in the harsh glare of publicity surrounding the trial.

The men and women who served as the jurors in the trial of Jack Ruby were exceptional in that it became their singular duty to sit in judgment on a man who played a bizarre and bloody role in perhaps the most controversial event of the twentieth century. They were ordinary in that nothing in their lives before or after the trial in February and March of 1964 has distinguished them from millions of their fellow citizens. They lived happily in quiet anonymity with the glaring exception of the nearly four weeks of the Ruby trial. For those few weeks, their pictures, names, and life stories appeared countless times in newspapers and magazines worldwide.

During the course of the trial, Causey kept a longhand diary in a reporter’s notebook, beginning on the second day of his term as a juror. He continued keeping notes day-by-day as the trial continued, ending on Saturday, March 14, when the jury delivered its verdict. He then wrote a short epilogue. Later, he wrote a memoir from the diary he kept during the trial. Both the memoir and the diary are presented here, augmented with editor’s notes taken from the trial transcripts, books, newspaper and magazine articles, and interviews with some of the surviving jurors.

Causey’s memoir and diary are first-hand accounts of one of the most controversial, significant trials of the twentieth century, and reveal new insights into the dynamics of the jury and its deliberations.

“In my thirty-five years on this planet I had never been exposed to a more devastating shock than at that moment. I suddenly felt as though the ceiling and all the upper seven floors of the Records Building had collapsed on my head.” —Max Causey, upon being selected as the first juror in the Jack Ruby trial

JOHN MARK DEMPSEY is assistant professor of journalism at the University of North Texas. The Greenville, Texas, native has a background in the newspaper, public relations and radio broadcasting fields, and continues to work in radio as a news announcer for the Texas State Network. He lives with his family in Denton, Texas.

JOHN MARK DEMPSEY is a native Texan and long-time admirer of the Light Crust Doughboys. His involvement in radio is also long-standing. He currently works as a newscaster for the Texas State Network and as an assistant professor of broadcast journalism at the University of North Texas. Dempsey is the editor of [The Jack Ruby Trial Revisited: The Diary of Jury Foreman Max E. Causey][] by UNT Press. Dempsey holds degrees from East Texas State University and a Ph.D. from Texas A&M. He lives in Denton, Texas.

For more information on this book and the Light Crust Doughboys, please visit http://www.thelightcrustdoughboys.com.