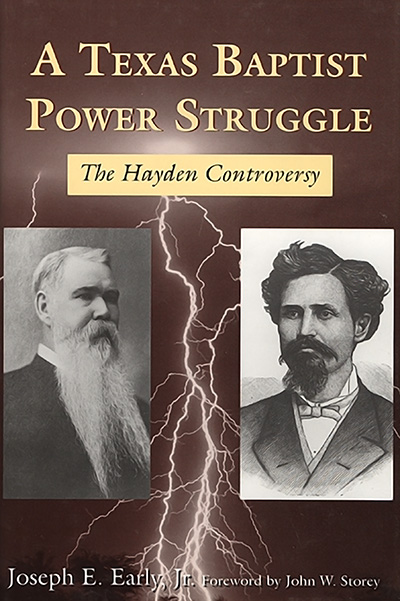 The Hayden Controversy was one of the most bitter feuds in Baptist history. In the nineteenth century, Protestant denominations in Texas endured difficult transitions from a loosely organized frontier people to a more cooperative and organized body capable of meeting the needs of growing denominations. The Methodists, Churches of Christ, and Baptists all endured major splits before their survival was certain. Of all the Protestant bodies, however, the Hayden Controversy was the fiercest and most widespread, with repercussions that continue to affect current Baptist life.

Joseph E. Early, Jr., tells the story of how one man, Samuel Augustus Hayden, almost destroyed the newly organized Baptist General Convention of Texas (BGCT) before it could take root. In the final decades of the nineteenth century, Hayden caused such unrest among Texas Baptists that after a failed attempt to take over the BGCT, he was expelled from the state body. In turn, he created a rival organization, the Baptist Missionary Association (BMA), which continued to fight perceived oppression by the BGCT.

While trying to take over the BGCT, Hayden, through his newspaper, accused his enemies of embezzlement, heresy, arson, and strong-arm tactics. Hayden’s high-profile opponents included some of the most powerful and well-known Baptists in Texas: George Washington Truett, Benajah Harvey Carroll, and James Britton Cranfill. Through their newspapers they asserted that Hayden was insane, a liar, and a heretic. Baptists in Texas were forced to take sides in the struggle. After more than twenty years of turmoil, the controversy came to a dramatic conclusion on a train bound for the Southern Baptist Convention, where Cranfill and Hayden scuffled over a pistol. Two shots were fired; miraculously, no one was hurt.

Though the main events of the Hayden Controversy occurred more than one hundred years ago, history appears to be repeating itself. On August 11, 2004, the Baptist Standard called on all Baptists to recognize that they are reliving the Hayden Controversy. Once again Texas Baptists are being asked to take sides in a struggle for leadership with the formation of a new organization called the Southern Baptists of Texas (SBT). Both the BGCT and the SBT have strong leaders intent on guiding Texas Baptists in doctrinal and denominational matters. The BGCT once again finds itself dealing with a splinter group on some of the same issues fought over in the Hayden Controversy.

“This fine work by Professor Joe Early pulls together the diverse and complicated strands of the Hayden controversy and, significantly, treats the principal players as neither heroes nor villains. S. A. Hayden, certainly a contentious and divisive sort, emerges from these pages somewhat more favorably than usual, while B. H. Carroll, a giant among Texas Baptists, comes off as less than saintly, a man determined to have his way and prepared to behave in an unprincipled manner to get it.” —From the Foreword by John W. Storey

“A fine addition to the study of Texas Baptists and of Texas life in the late nineteenth century. The Hayden Controversy was the major conflict in Baptist life in the late 1800s and had a significant cultural effect on Texas, especially in communities like Waco and Dallas.” —Michael E. Williams, Dallas Baptist University