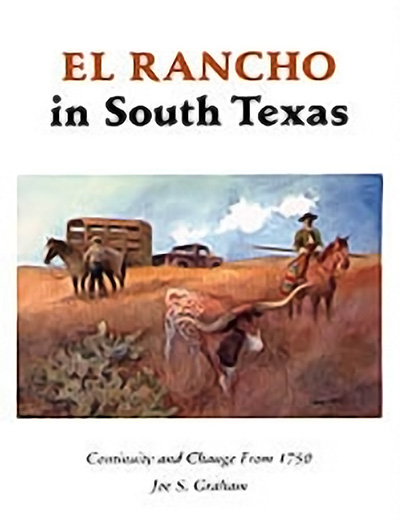 El Rancho in South Texas: Continuity and Change from 1750

El Rancho in South Texas: Continuity and Change From 1750 is now available as a free e-book at the UNT Digital Library and The Portal to Texas History.

“A look at the Hispanic roots of… Cowboy Culture,… the entire life-style of cattle ranching… especially good at the neglected area of ranch architecture, from mesquite-wood corrals to the jacales… of the vaqueros, and… the patron’s haciendas, or ranch headquarters.” —True West

“A lively and informative overview of cattle ranching in south Texas traces the development… from its Spanish roots to its modern branching into the oil and gas business… The well-written account brings much of the history of south Texas ranching to life.” —Southwestern American Literature{endorsement

Walter Prescott Webb and other historians have long recognized South Texas as the cradle of the cattle industry in the United States. While missions and presidios were the primary Spanish frontier institutions in the settlement of California, Arizona, New Mexico, and central and east Texas, the private cattle ranch was the institution used to settle South Texas. As it had been in Spain and later in Mexico, the private cattle ranch was the cutting edge of the Spanish frontera.

This book examines the Spanish and Mexican roots of the ranch, which came to the South Texas region as early as the 1730s. It traces its evolution through the Establishment Period, 1750-1848; El Rancho to The Ranch, 1848-1885; Ranch Modernizes, 1885-1930; and from the Ranch to Agribusiness, 1930-present. An unusual feature of the exhibit is its exploration of the women’s role on the early Spanish and Mexican ranch.

JOE S. GRAHAM was a professor of Anthropology and Folklore at Texas A&M University, Kingsville and worked under Don Americo Paredes in Mexican-American folklore at the University of Texas. He was born and grew up on ranches in the Big Bend country of West Texas.

El Rancho in South Texas: Continuity and Change from 1750