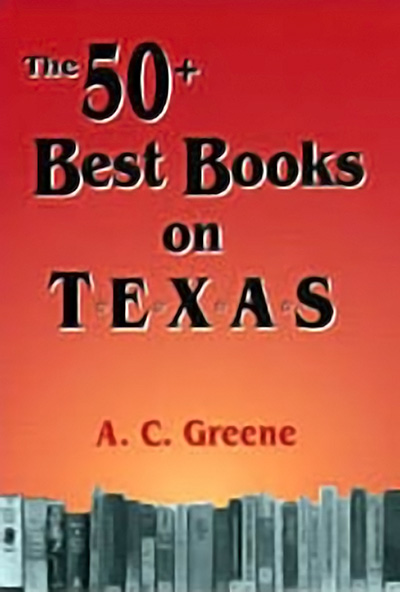 The 50+ Best Books on Texas

About Greene's The 50+ Best Books on Texas

Undaunted by the furor caused by his first listing, A. C. Greene offers a new selective survey for anyone who wants to know more about Texas and Texas books. Each of the selections in The 50+ Best Books on Texas have been completely rewritten, or added to, or updated in this 1998 offering.

“In the sixteen years that The 50 Best Books on Texas has been around it has become a kind of guidebook to Texas literature, which embarrasses me. It was not conceived as that… the listings are my picks…

“Some books have been dropped from this 50+ Best Books list… Texas writing is changing. Many more Hispanic and black writers will explore their Texas roots or relationships as individuals. More Texas writers will pursue the peculiar puzzles of life in the larger Texas cities, and perhaps the day will come when there will be no need, other than historical, for lists of ‘best’ books about Texas.” —from the Introduction

“A. C. Greene’s list of ‘The Fifty Best Texas Books,’ first published in the August 1981 issue of Texas Monthly, was by the author’s own admission subjective, but also daring. It attempted to discriminate and judge, something not many critics of Texas writing had been willing to do prior to the 1980s. Greene apparently accomplished his goal: he provoked. The purpose of Larry McMurtry’s now famous essay, ‘Ever a Bridegroom: Reflections on the Failure of Texas Literature,’ was, in part at least, to dispute Greene’s contention that fifty good Texas books exist… The public response was immediate and sometimes explosive.” —Range Wars

The 50+ Best Books on Texas