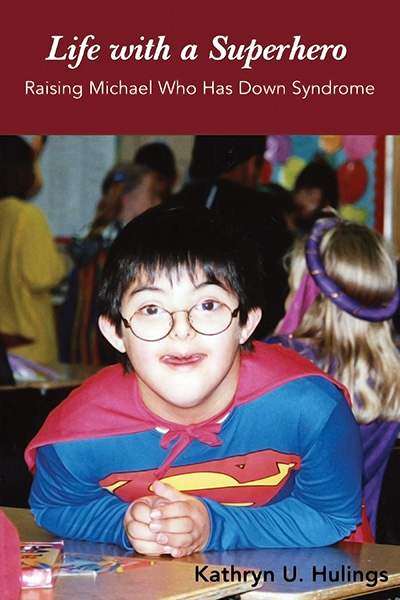 About Hulings's Life with a Superhero

Please visit Kathryn U. Hulings’s new website to learn more about her book, Life with a Superhero: Raising Michael Who Has Down Syndrome.

Over twenty years ago, in a small Israeli town, a desperate mother told a remarkable lie. She told her friends and family that her newborn child had died. That lie became the catalyst for the unfolding truth of the adoption of that same baby—Michael —who is, in fact, very much alive and now twenty-two years old. He also has Down syndrome.

When Kathryn Hulings adopted Michael as an infant, she could not have known that he would save her life when she became gravely ill and was left forever physically compromised. Her story delights in how Michael’s life and hers, while both marked by difference and challenge, are forever intertwined in celebration and laughter. With candor and a sense of humor, Life With a Superhero wraps itself around the raucous joy of Michael’s existence with his four older siblings who play hard and love big; how Kathryn and her husband, Jim, utilize unconventional techniques in raising kids; the romance between Michael and his fiancée, Casey; the power of dance in Michael’s life as an equalizing and enthralling force; the staggering potential and creativity of those who are differently-abled; and the mind-blowing politics of how Kathryn navigated school systems and societal attitudes that at times fought to keep Michael excluded from the lives of kids deemed “normal.”

No other books about the parenting experience outline what to do when, say, a child runs across the roof of a tri-level house pretending he can fly, or shows up in a 7th grade social studies class dressed like Spiderman, or calls 911 when his girlfriend breaks his heart. But, as Michael’s mom, Kathryn has been trying to figure how to be a mother in just such circumstances—sometimes with success, sometimes with dismal failure—for over two decades.

Most of the books about parenting a child who has Down syndrome are concerned with only the first few years of life and are based in biological births. Life with a Superhero is fresh and new in that it engages the reader with the parenting journey all the way into young adulthood and it also involves the spectrum of adoption. This memoir chronicles not only the early years—filled with both trepidation and joy—of raising a child who has Down syndrome, but also the ups and downs of twelve years of public schooling, the slippery slope of the transition process into the population at large, navigating puberty and adolescence, friendships, community involvement with typical folks and folks with special needs, and the exuberant glee of finding love and contemplating marriage and an independent life.

“Life with a Superhero’s greatest strengths are the aesthetic value of the writing—it’s very lyrical and beautiful—and the uncommon perspective on parenting an older child with Down syndrome.” —Kathryn Soper, author of The Year My Son and I Were Born and editor of Gifts: Mothers Reflect on How Children with Down Syndrome Enrich Their Lives

“Make no mistake: This is a love story, one that is at once foreign and familiar, painful and poignant. Like all great love stories, it is also a story about taking in and letting go. Whether or not you are a parent of a child with special needs, you will have a place in your heart for taking in Michael. As I read, I was taken on a truly incredible journey, one fraught with ‘the sweetness of secrets and the necessity of betrayals.’ Kathryn Hulings does, indeed, deserve ‘way better than a plus sign’; she deserves a star.” —Pamela K. Coke, Associate Professor of English Education, Colorado State University

“It might be that this powerful and complicated story is mistitled, for Life with a Superhero suggests that only one heroic figure makes an appearance here. Yet, from the first page, this memoir that reads like a novel brims with characters who sometimes struggle mightily yet in the end perform lionhearted feats almost every day, year after year—from adoptive mom Kathryn Hulings to her husband Jim and their biological kids to inspired teachers of many kinds. By turns hilarious and heartbreaking, Kathryn Hulings’ debut book is a moving portrayal of family and community dedication and love.” —John Calderazzo, author of Rising Fire: Volcanoes and Our Inner Lives

“I knew from that moment I met the Hulings family that it was all going to be ‘good in the neighborhood’ (our school motto) for Michael at Blevins Middle School. I could write my own book, just about Michael stories, but it would not have the voice that Kathryn brings to hers! I am honored to have been able to share the experiences with the Hulings and their amazing journey with their son.” —Tracy Gefroh, MA, Special Education Teacher, Blevins Middle School, Fort Collins, Colorado

KATHRYN U. HULINGS is a mother and writer who has called Fort Collins, Colorado, her home for over thirty years. While raising her family of five kids with her husband, Jim, Kathryn worked as an advocate for children with special needs, served as a community volunteer, earned a BA in English from Colorado State University, and subsequently taught 8th grade Language Arts at a local middle school. Kathryn returned to school to get an MA in English/Creative Nonfiction, also from CSU, where she is now an adjunct faculty member teaching composition and literature courses. When not teaching, parenting, or playing with her three dogs, Kathryn can be found writing prose, poetry, essays and screenplays.

More from Kathryn U. Hulings