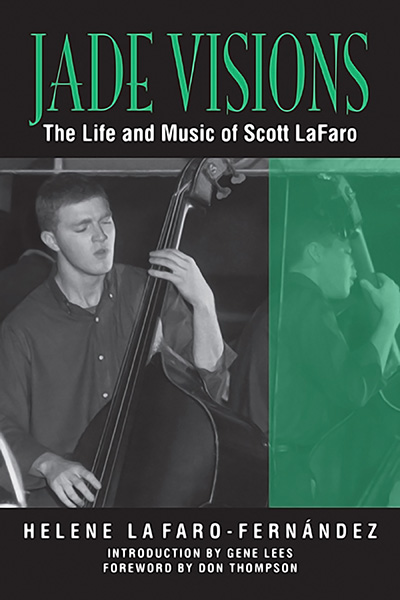 Jade Visions: The Life and Music of Scott LaFaro

Jade Visions was selected as a title within the Best of the Best from University Presses 2010 program and presented at the annual American Library Association conference. You can view the C-SPAN BookTV video of the program featuring Jade Visions (at the 01:19:45 hour mark for a seven-minute discussion).

Jade Visions is the first biography of one of the twentieth century’s most influential jazz musicians, bassist Scott LaFaro. Best known for his landmark recordings with Bill Evans, LaFaro played bass a mere seven years before his life and career were tragically cut short by an automobile accident when he was only 25 years old. Told by his sister, this book uniquely combines family history with insight into LaFaro’s music by well-known jazz experts and musicians Gene Lees, Don Thompson, Jeff Campbell, Phil Palombi, Chuck Ralston, Barrie Kolstein, and Robert Wooley. Those interested in Bill Evans, the history of jazz, and the lives of working musicians of the time will appreciate this exploration of LaFaro’s life and music as well as the feeling they’ve been invited into the family circle as an intimate.

“Fernández’s insightful comments about her brother offer far more than jazz scholars have ever known about this significant and somewhat enigmatic figure in the history of jazz. All in all, a very complete portrait.” —Bill Milkowski, author of Jaco: The Extraordinary and Tragic Life of Jaco Pastorius

“LaFaro’s story is compelling not only because of his own prowess as a musician, but also due to the company he kept. How many musicians by their twenty-fifth year could say they had played with Benny Goodman, Ornette Coleman, Chet Baker, Stan Kenton, and Bill Evans? Only one. Scott LaFaro.” —Frank Alkyer, publisher, DownBeat

“Scott LaFaro was a true jazz innovator. His sound, sense of time and melodic invention blazed a trail for modern bassists and he was a beacon of light for those players who dreamed of more freedom within structure. Bill Evans once described Scott’s playing to me: ‘He was really discovering something every night on the bandstand. He had all these ideas that were just bubbling up out of him. And he had a way of finding notes that were more fundamental than the fundamental.’” –—Marc Johnson, bassist

“Scott LaFaro was a brilliant artist whose untimely death remains one of the great tragedies of jazz more than four decades later.” —Jed Eisenman, manager of the Village Vanguard jazz club

“It’s astonishing that [LaFaro’s] massive reputation is primarily based on a handful of albums that feature him in full flower: the four recorded with the Bill Evans Trio, two by Coleman and Jazz Abstractions, a Gunther Schuller recording. His work on these is so amazing, his facility on his instrument so fluid, his melodic ideas and group interplay concepts so advanced that they still reverberate today. Finally LaFaro has a worthy volume commensurate with his stature in music.” —AllAboutJazz.com

[T]his is a book no serious enthusiast for LaFaro or his music can afford to be without.” —Jazzwise

HELENE LaFARO-FERNÁNDEZ was born in Irvington, New Jersey, but spent most of her youth in Geneva, New York. In 1957 she joined her brother Scott in Los Angeles and has made her home there ever since.

Jade Visions: The Life and Music of Scott LaFaro