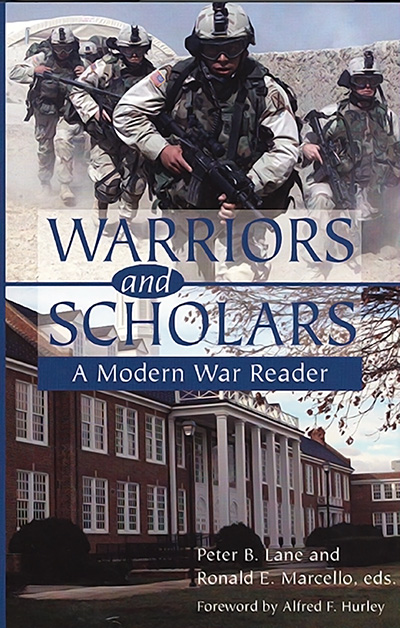 About Lane and Marcello's Warriors and Scholars

Few works of military history are able to move between the battlefield and academia. But Warriors and Scholars takes the best from both worlds by presenting the viewpoints of senior, eminent military historians on topics of their specialty, alongside veteran accounts for the modern war being discussed. Editors Peter Lane and Ronald Marcello have added helpful contextual and commentary footnotes for student readers.

The papers, originally from the University of North Texas’ annual Military History Seminar, are organized chronologically from World War II to the present day, making this a modern war reader of great use for the professional and the student. Scholars and topics include David Glantz on the Soviet Great Patriotic War, 1941-1945; Robert Divine on the decision to use the atomic bomb; George Herring on Lyndon Baines Johnson as Commander-in-Chief; and Brian Linn comparing the U.S. war and occupation in Iraq with the 1899-1902 war in the Philippines.

Veterans and their topics include flying with the Bloody 100th by John Luckadoo; an enlisted man in the Pacific theater of World War II, by Roy Appleton; a POW in Vietnam, by David Winn; and Cold War duty in Moscow, by Charles Hamm.

“The Soviet Union’s Great Patriotic War was a war of unprecedented brutality. As many as 35 million Russian soldiers and civilians, almost 4 million German soldiers, and countless German civilians, died. The searing effect of this terrible war on the Soviet soul endured for generations through today, shaping the development of the postwar Soviet Union and ultimately, I believe, contributing to its demise in 1991.” —From Col. David M. Glantz, “Fact and Fancy: The Soviet Great Patriotic War, 1941-1945”

“Whatever his wishes, LBJ is remembered as a war president, and among America’s commanders-in-chief, he generally rates with the least effective. He is scored, on the one side, as the stereotypical, shoot-from-the-hip Texan, the warmonger who destroyed Vietnam to save his own ego, and from the other side as a timid, ‘political’ war leader who refused to do what was necessary to win an eminently winnable war. Such criticisms tell a great deal about the way Johnson fought the war, but they do not get at the fundamental problems of his war leadership.” —From Dr. George C. Herring, “The Reluctant Warrior: LBJ as Commander-in-Chief”

Warriors and Scholars: A Modern War Reader is a recommended text for use in classrooms where the following subjects are being studied: History, Military.

Edited by Peter B. Lane and Ronald E. Marcello. This book pairs eminent military historians and veterans discussing key military engagements and themes, from World War II to the present. Inside are such illustrious names in military history as David Glantz (Soviet warfare in WWII), Robert Divine (decision to use atomic bomb), George Herring (Johnson as commander-in-chief), and Brian Linn (comparing occupation in Philippines 1899-1902 with current occupation in Iraq). Within each military period in question is a veteran’s narrative account, giving an “I was there” perspective of the war being discussed.

[“University of North Texas for the Military History Institute Program”]

More from Peter B. Lane

RONALD E. MARCELLO received his Ph.D. from Duke University and is professor of history at the University of North Texas and director of the Oral History Program, where he has conducted over 1,000 interviews with World War II veterans. Coeditor of three books dealing with oral history and military history, his academic specialty is the Age of Franklin D. Roosevelt.