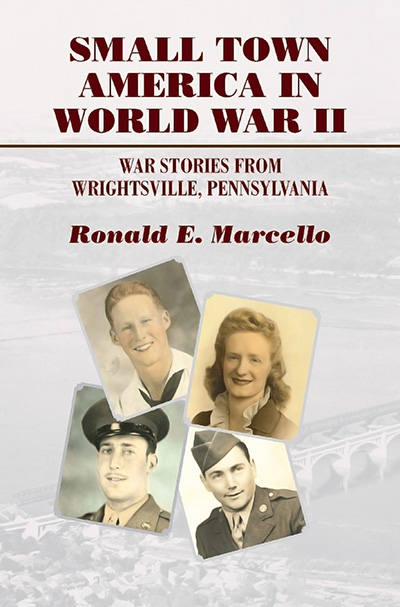 Historians acknowledge that World War II touched every man, woman, and child in the United States. In Small Town America in World War II, Ronald E. Marcello uses oral history interviews with civilians and veterans to explore how the citizens of Wrightsville, Pennsylvania, responded to the war effort. Interviews with citizens and veterans are organized in sections on the home front; the North African-Italian, European, and Pacific theatres; stateside military service; and occupation in Germany. Throughout Marcello provides introductions and contextual narrative on World War II as well as annotations for events and military terms.

Overseas the citizens of Wrightsville turned into soldiers. A veteran of the Battle of the Bulge, Edward Reisinger, remembered, “Replacements had little chance of surviving. They were sent to the front one day, and the next day they were coming back with mattress covers over them.” Tanker Mervin Haugh recalls, “The next thing we knew, the German tanks attacked us. They knocked out five of our tanks quickly, and they all burned up in flames.”

RONALD E. MARCELLO received his Ph.D. from Duke University and is professor of history at the University of North Texas and director of the Oral History Program, where he has conducted over 1,000 interviews with World War II veterans. Coeditor of three books dealing with oral history and military history, his academic specialty is the Age of Franklin D. Roosevelt.