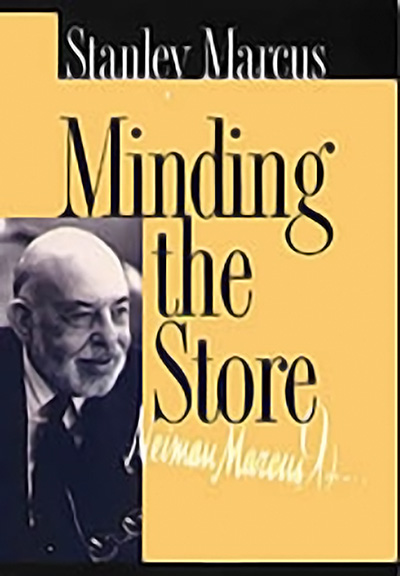 About Marcus's Minding the Store

“‘There is never a good sale for Neiman Marcus unless it’s a good buy for the customer.’ That was one of the first declarations of business philosophy I heard my father, Herbert Marcus, make soon after I came to work at Neiman Marcus in 1926.” Thus began the 1974 edition of Minding the Store. Reprinted in hardcover in 1997 to celebrate the 90th anniversary of Neiman Marcus, it is now available for the first time in paperback.

Mr. Marcus has spent most of his life not only in helping to create a retailing enterprise renowned throughout the world as the epitome of quality, but also in setting high standards for the level of taste of all who desire “the better things in life.” In doing so he has played a key role in making Dallas itself a success. “Mr. Stanley,” as he is affectionately called by all his Neiman Marcus friends and associates, has made The Store a legendary success.

Although he retired from active involvement in Neiman Marcus in 1977, the influences of the philosophies of business he developed remain an important part of the training of Neiman Marcus personnel. Those basic principles—best exemplified by his belief in his father’s business philosophy—are the reasons Neiman Marcus is today recognized as the taste leader of American retailing.

Minding the Store is a warm portrait of a man and an exuberant celebration of the store that has become the best-known landmark in Texas since the Alamo.

” Minding the Store recounts the varied events of Marcus’ life and career in an engaging and personable voice.” —AB Bookman’s Weekly

“Stanley Marcus is a bearded grandfather with the blithe spirit of a teenager. He’s a merchant prince of the old school who happily shatters custom with change and can’t stand still for fear of going backward. He’s an art collector, a music lover, a world traveler, an entrepreneur, and a born salesman who will leave the executive suite to help sell a dollar tie or a $10,000 fur coat. He’s as idealistic as a preacher, as practical as a politician, with the hard money sense of a banker and the flair of a Barnum. And, as this book shows, he is also a writer, able, articulate, and candid.” —St. Louis Globe-Democrat

“One of the success stories of our time… sparkling and enthralling!” —Christian Science Monitor

“An opulent story that only an insider could tell!” —New York Times

“The delightful story of a man and a store!” —Atlanta Constitution

“Fascinating… A success story that has become the stuff of legend!” —Cincinnati Post

Minding the Store is a recommended text for use in classrooms where the following subjects are being studied: Business.

Although he retired from active involvement in Neiman Marcus in 1977, the influences of the philosophies of business he developed remain an important part of the training of Neiman Marcus personnel. The New York Times deemed Minding the Store “an opulent story that only an insider could tell!”

STANLEY MARCUS, Chairman Emeritus of the Neiman Marcus stores, received a B.A. degree from Harvard University and also attended Harvard Business School. A noted lecturer who published fine press miniature books out of The Somesuch Press, he wrote Minding the Store, Viewpoints of Stanley Marcus, and Stanley Marcus from A to Z all from the University of North Texas Press.