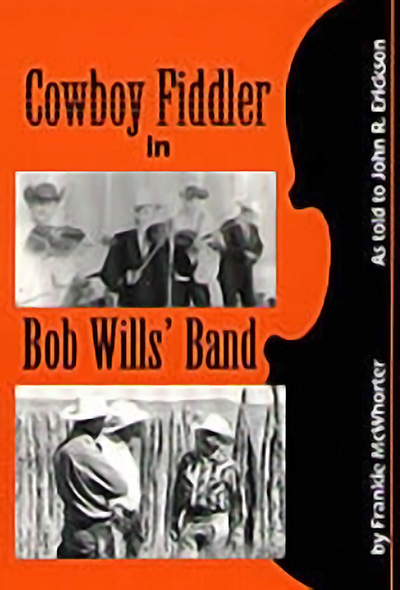 About McWhorter and Erickson's Cowboy Fiddler in Bob Wills' Band

“If you like cowboys, or if you like country fiddling, you’ll enjoy Frankie McWhorter’s story… If you like both, you’re doubly in luck, for McWhorter is an unusual combination: a working cowboy and a working fiddler. If you like Bob Wills’ music—and who doesn’t?—you’ll find his recollections of Wills compelling, often funny, occasionally sad.” —Elmer Kelton

Frankie McWhorter grew up in Bob Wills Country—the Texas Panhandle—and bought his first fiddle with his cowboy wages in 1950. “I told Daddy I’d bought me a fiddle. He said, ‘The heck you did. I thought we either needed to grease that windmill or there was a hog hung under the gate.’” McWhorter later played with Clyde Chesser and the Texas Village Boys and the Miller Brothers Band before being asked to join Bob Wills and become the 463rd Texas Playboy—a band that had a tremendous impact on the country-western music field. McWhorter tells stories of touring with these bands and of his hours spent listening to Wills tell his stories.

McWhorter, who began cowboying in 1948, also reveals his adventures and misadventures with horses, cattle and other cowboys days on the JA Ranch.

“For two straight hours, Frankie played one fiddle tune after another. These were… not western swing but old-time reels and breakdowns, many of which he had learned from Bob Wills… How could those horse breaker’s hands adjust to the critical tolerances on a violin’s neck, the fractions of an inch that made a note either very right or very wrong?… Most of us do well to attain proficiency in one field, perhaps two at the most. Frankie had mastered three… He could cowboy all day and play the fiddle all night… I also found him to be an accomplished storyteller.” —John Erickson

By Frankie McWhorter as told to John R. Erickson.

FRANKIE MCWHORTER grew up in the Texas Panhandle town of Memphis and has managed a seventeen-section ranch in the Panhandle. In addition to fiddling and cowboying, his books include Horse Fixin’: Forty Years of Working with Problem Horses, as told to John R. Erickson, and Play It Lazy: The Bob Wills Fiddle Legacy, with Lanny Fiel.