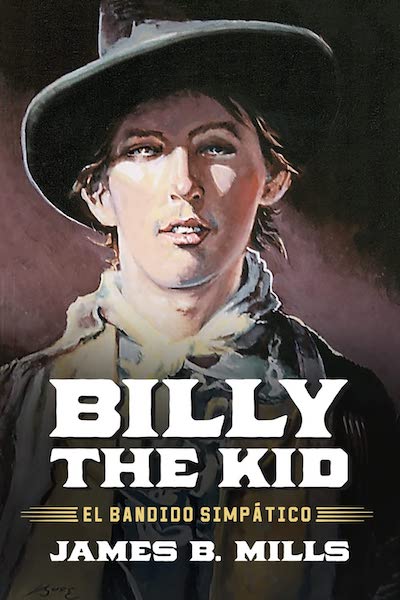 About Mills's Billy the Kid

James B. Mills has left no stone unturned in his twenty-year quest to tell the complete story of Billy the Kid. He explores the Kid’s disputable origins, his family’s migration from New York into the Southwest, and how he became an orphan, as well as his involvement in the Lincoln County War, his outlaw exploits, and his dealings with Governor Lew Wallace. Mills illuminates the Kid’s relationships with his enemies, lovers, and numerous friends to contextualize the man’s character beyond his death and legacy. Most importantly, Mills is the first historian to fully detail the Kid’s relations with New Mexicans of Spanish descent.

So, the question remains, who really was the person the world knows as Billy the Kid? Was he more than a young reprobate committed to a life of crime, who relished becoming the famous outlaw and cold-blooded, self-absorbed “sociopath” or “thug” that some still prefer him—need him—to be? Or was he in fact the generally good-hearted, generous, courteous, young vigilante that so many remembered with considerable fondness, who ultimately preferred the company of the more peaceable Hispanic population than his own Anglo people? In this groundbreaking biography, Mills takes the reader closer to the flesh-and-blood human being named Henry McCarty, alias William H. Bonney, than ever before.

JAMES B. MILLS was born in 1983 and resides in Australia. He has studied the American frontier and numerous other areas of history since childhood. He has published numerous articles for True West and Wild West magazines. He enjoys living a quiet life with his cat Bernard and dog Dennis.

More from James B. Mills