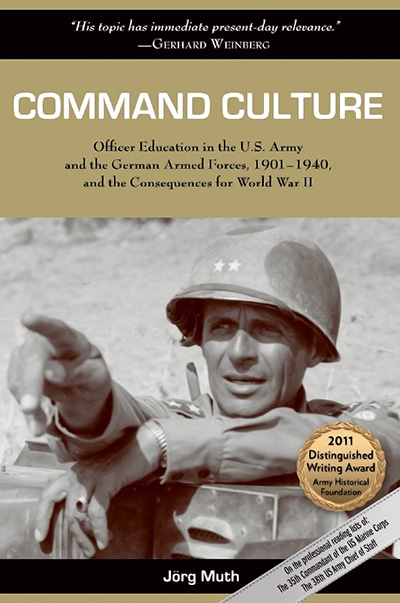 Command Culture: Officer Education in the U.S. Army and the German Armed Forces, 1901-1940, and the Consequences for World War II

Please visit the New Books Network website to listen to an interview with the author.

“The general message, though controversial and certain to lead to arguments, is buttressed by substantial evidence. Muth’s topic has immediate present-day relevance.” —Gerhard Weinberg, author of A World at Arms

“An important and long-lasting contribution to the debate over officer training in the United States.” —Robert Citino, author of The German Way of War

“Muth’s challenge to the ‘new military history’ will generate controversy but cannot be dismissed.” —Dennis Showalter, author of Patton and Rommel

“Muth’s analysis of the U.S. Army is a hard one, but he backs it up with extensive research. This is one of the most important books about the German and American armies in many years.” —Major-General (ret) David T. Zabecki, Military History

“This is an important book that disputes the triumphalist literature about officer education in the US Army and recommends a more honest educational approach to achieve an effective command culture, at least at the tactical level. Command Culture has received much critical attention and is shaping an ongoing debate about American officer education.” —John T. Kuehn, Michigan War Studies Review

“This is a very important book with serious contemporary as well as historical implications. It should be read widely by students of the Second World War and by anyone interested in questions of service culture, institutional learning, doctrine, and officer training.” —Ingo Trauschweitzer, Journal of Military History

Command Culture: Officer Education in the U.S. Army and the German Armed Forces, 1901-1940, and the Consequences for World War II is a recommended text for use in classrooms where the following subjects are being studied: History, Military.

In Command Culture, Jörg Muth examines the different paths the United States Army and the German Armed Forces traveled to select, educate, and promote their officers in the crucial time before World War II. Muth explores the paradox that in Germany officers came from a closed authoritarian society but received an extremely open minded military education, whereas their counterparts in the United States came from one of the most democratic societies but received an outdated military education that harnessed their minds and limited their initiative. Command Culture clearly explains the lack of audacity of many high ranking American officers during World War II, as well as the reason why so many German officers became perpetrators or accomplices of war crimes and atrocities or remained bystanders without speaking up. Those American officers who became outstanding leaders in World War II did so not so much because of their military education, but despite it.

JÖRG MUTH received his Ph.D. in history from the University of Utah. He is the author of Flucht aus dem militärischen Alltag: Ursachen und individuelle Ausprägung der Desertion in der Armee Friedrichs des Großen, a study of desertion in the Prussian army during the era of Frederick the Great.

Command Culture: Officer Education in the U.S. Army and the German Armed Forces, 1901-1940, and the Consequences for World War II