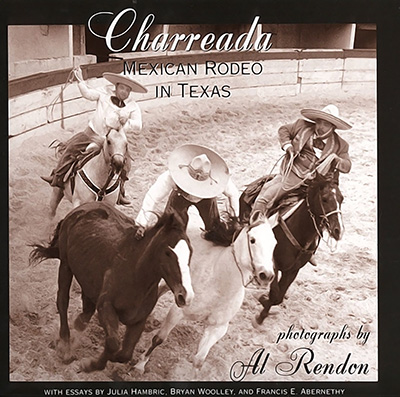 About Rendon and Abernethy's Charreada

Charreada: Mexican Rodeo in Texas is now available as a free e-book at the UNT Digital Library.

El Charro, or man on horseback, has represented the spirit of independent Mexico since he played an important role in the 1821 revolution. He is the Mexican version of the American cowboy, only much older, arising from the ranch culture first brought to Mexico by the Spanish. The Charreada is his rodeo, his opportunity to show off both his skills with rope and horse and his decorative, elegant costume. It is at the center of Mexican heritage and self-image, a source of mythology and genuine heroes that has been brought to Texas by immigrants. And since 1989, it has included women, charras, who participate in elaborate and difficult riding formations.

San Antonio photographer Al Rendon has taken this ideal subject for the camera and created a collection of splendid sepia photographs reproduced in duotone. The photos juxtapose the grit of the arena with the poise and polish of the charros, charras, and their horses. The essays, by Julia Hambric, Bryan Woolley, and F. E. Abernethy, describe the history of the charreada and its roots in Mexican culture. Hambric’s essay also details the costumes and events prescribed by tradition and the Federacion Nacional de Charro. Together, this is a unique examination of an important part of Mexico’s heritage.

“Al Rendon… captures the pageantry of the charreada in grand, voluptuous still lifes—particularly… the ‘Escaramuza Charra,’ the female form of the charreada. Shot with a wide lens, the synchronized riding drills are painterly, ethereal portraits of the charras.” —Shermakaye Bass, Austin-American Statesman

“The unique character of Mexican-style rodeo is deftly explained and well illustrated in this work.” —Dallas Morning News

“Unlike other rodeos, the events focus on style rather than speed… There are no barrel races or bronco riding, but plenty of thrills keep the spectators on the edge of their seats with charros leaping onto the backs of charging mares and tailing the bulls.” —Cowboys & Indians

AL RENDON is the owner of Rendon Photography & Fine Art in San Antonio. A photographer since he has been able to hold a camera, his images have appeared in Newsweek, USA Today, Texas Monthly, and numerous other books and magazines.