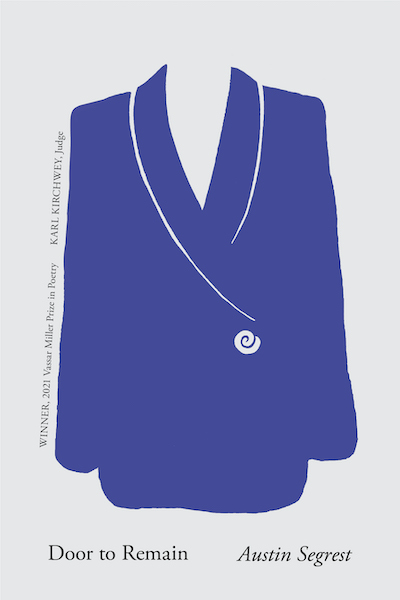 About Segrest's Door to Remain

“There are some poets we admire for a mastery that allows them to tell a story, express an epiphany, form a conclusion, all gracefully and even memorably— yet language in some way remains external to them. But there are other poets in whom language seems to arise spontaneously, fulfilling a design in which the poet’s intention feels secondary. Books by these poets we read with a gathering sense of excitement and recognition at the linguistic web being drawn deliberately tighter around a nucleus of human experience that is both familiar and completely new, until at last it seems no phrase is misplaced and no word lacks its resonance with what has come before. Such a book is Austin Segrest’s Door to Remain.”— Karl Kirchwey, author of Poems of Rome and judge

“Segrest’s formal ingenuity holds out the hope of order amidst the increasingly illegible chaoses of human love.”—Kimberly Johnson, author of Uncommon Prayer

”. . . a life study for the new century.”—Amy Newman, author of On This Day in Poetry History

AUSTIN SEGREST is a poet and critic originally from Alabama. His poems appear in Poetry, The Yale Review, Threepenny Review, Ecotone, New England Review, and others. He teaches at Lawrence University in Appleton, Wisconsin.

See all titles in our Series: