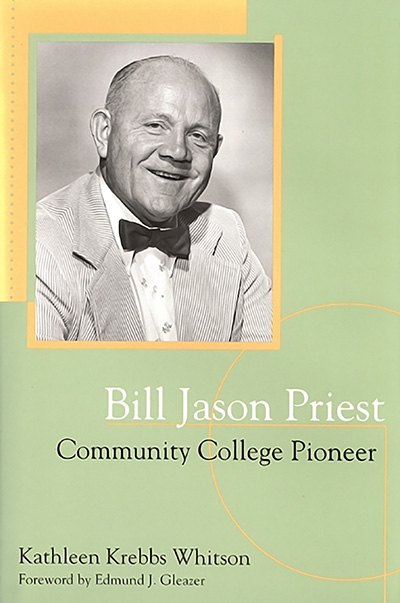 There are few things that are purely American. On that short list are baseball and the two-year community college. Bill Jason Priest possessed skill and acumen for both. The better part of his life was spent developing and defining the junior college into the comprehensive community college. His contributions earned him a prestigious place in the annals of higher education, but his personality was not one of a stereotypical stodgy educator, nor is the story of his life a dry read.

After working his way through college, Priest played professional baseball before serving in Naval Intelligence during World War II. His varied experiences helped shape his leadership style, often labeled as autocratic and sometimes truculent in conservative convictions. The same relentless drive that brought him criticism also brought him success and praise. Forthright honesty and risk-taking determination combined with vision brought about many positive results.

Priest’s career in higher education began with the two-year college system in California before he was lured to Texas in 1965 to head the Dallas County Junior College District. Over the next fifteen years Priest transformed the junior college program into the Dallas County Community College District (DCCCD) and built it up to seven colleges. He performed major roles in the evolution of nursing education, the founding of a telecommunications center for the production of televised courses, the delivery and acceptance of vocational education, and in greater breadth in noncredit courses. After his retirement in 1981, he continued to serve as Chancellor Emeritus until 2003.

Drawing from archives as well as from numerous interviews with Priest and his personal and professional associates, Kathleen Krebbs Whitson presents the life of a giant in Texas education and reveals his lasting influence upon the community college movement.

“This book tells the story of the remarkable development of a new kind of educational institution through the experiences of Bill J. Priest, a maverick who took the reins in building the DCCCD.” —Edmund J. Gleazer, University of Texas at Austin

“The book captures not only the spirit that made Bill Priest such an effective and commanding presence in DCCCD, but the spirit that embodied the growth and evolution of today’s community college. Priest remains a legend to many familiar with the history of community colleges, and the book is a fitting testament to the genius of his vision.” —–Stephen B. Kinslow, executive Vice President: Academic, Student, and Campus Affairs, Austin Community College

Bill Jason Priest, Community College Pioneer is a recommended text for use in classrooms where the following subjects are being studied: Education.

Bill Jason Priest is credited with developing and defining the Dallas County Community College District, transforming the junior college program into a seven-campus district from 1965 to 1981. Drawing from archives and numerous interviews with Priest and his personal and professional associates, Kathleen Krebbs Whitson presents the life of a giant in Texas and community college education.

KATHLEEN KREBBS WHITSON is the Executive Dean of Instructional Support and Outreach Services at Brookhaven College, the seventh DCCCD campus. After teaching speech and drama at Kimball High School in the Dallas Independent School District and working as a broadcast journalist on the then-independent KTVT TV, she entered higher education as the Director of Public Information at Cedar Valley College, the sixth DCCCD college, before it opened. She earned a Ph.D. in Higher Education Administration from the University of North Texas and has taught as an adjunct instructor at El Centro and Eastfield Colleges. She lives in Keller, Texas.