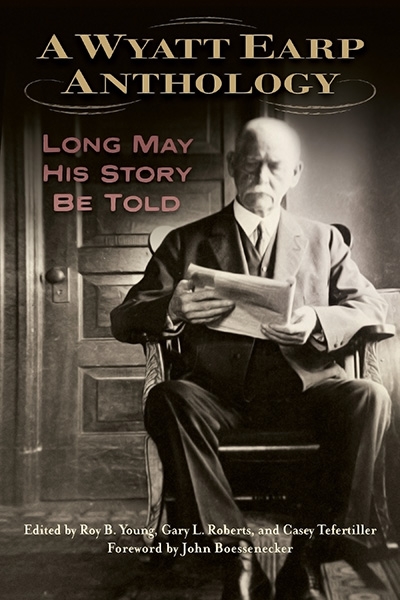 A Wyatt Earp Anthology: Long May His Story Be Told

Wyatt Earp is one of the most legendary figures of the nineteenth-century American West, notable for his role in the gunfight at the O.K. Corral in Tombstone, Arizona. Some see him as a hero lawman of the Wild West, whereas others see him as yet another outlaw, a pimp, and failed lawman.

Roy B. Young, Gary L. Roberts, and Casey Tefertiller, all notable experts on Earp and the Wild West, present in A Wyatt Earp Anthology an authoritative account of his life, successes, and failures. The editors have curated an anthology of the very best work on Earp—more than sixty articles and excerpts from books—from a wide array of authors, selecting only the best written and factually documented pieces and omitting those full of suppositions or false material.

Earp’s life is presented in chronological fashion, from his early years to Dodge City, Kansas; triumph and tragedy in Tombstone; and his later years throughout the West. Important figures in Earp’s life, such as Bat Masterson, the Clantons, the McLaurys, Doc Holliday, and John Ringo, are also covered. Wyatt Earp’s image in film and the myths surrounding his life, as well as controversies over interpretations and presentations of his life by various writers, also receive their due. Finally, an extensive epilogue by Gary L. Roberts explores Earp and frontier violence.

ROY B. YOUNG is editor of the Journal of the Wild West History Association and the author of James Cooksey Earp and Cochise County Cowboy War.

More from Roy B. Young

GARY L. ROBERTS is emeritus professor of history at Abraham Baldwin College and author of Doc Holliday: The Life and Legend.

CASEY TEFERTILLER is a former writer for the San Francisco Examiner and the author of Wyatt Earp: The Life behind the Legend.

A Wyatt Earp Anthology: Long May His Story Be Told