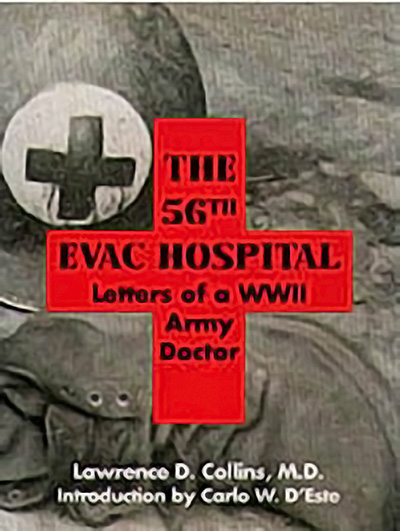 vol. 4: War and the Southwest Series

About Collins's The 56th Evac Hospital

“I see no way that we junior officers will ever be prepared for any major surgery… We’ll have to perform major surgery on our own, ready or not.” —Dr. L. D. Collins at the beginning of his tour of duty with the 56th Evacuation Hospital (a mobile tent hospital similar to the M*A*S*H units of Korean War fame), largely staffed by men and women trained at Baylor University College of Medicine in Dallas

Collins chronicles his experiences from training in Texas to service in Italy at Paestum, Dragoni, and worst of all, the desperate “Hell’s Half Acre” of Anzio Beach, where, because of frequent shelling of the hospitals, patients were known to go AWOL to the front.

Still, Collins writes, there was little grumbling. “They were completely committed to their task at whatever the cost… They would not have traded their country, their comrades, their officers, their medics, their nurses, or their doctors during those hectic days. Not for anything would they, nor we, have traded off the other, for those were days of complete commitment, complete cooperation, complete teamwork, and intense pride.”

Letters of an Army Doctor is a rare opportunity to view WWII from the perspective of those whose task it was to treat the sick and wounded. “Despite its dark moments,”says Carlo D’Este, “the book is filled with examples of how the human spirit survives under the dreadful conditions of war.”

“Collins gives us a rare glimpse from the perspective of those whose task it was to treat the sick and wounded. You will find the… letters fascinating reading.” —Veterans Voice

“Starred in Booklist” medal for “outstanding contribution to literature.”

LAWRENCE D. COLLINS, M.D., served in the Baylor Medical Unit from 1942-1945, after which he went into practice with his brother in Waco. In 1982 he retired from medical practice and lived in Waco with his wife Margaret.