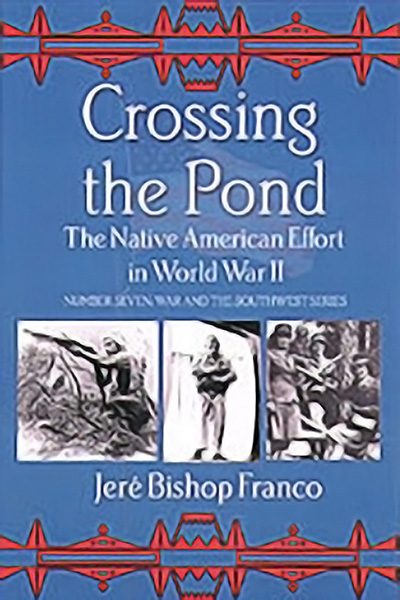 vol. 7: War and the Southwest Series

About Franco's Crossing the Pond

“Crossing the Pond” is a term Native Americans used to describe the process of being transferred overseas for military duty. This was both an event and a duty taken quite seriously by tribal members, who participated in every aspect of wartime America. On the homefront, Native Americans gave comparable and sometimes exemplary contributions to civilian defense work, Red Cross drives, and war bond purchases.

Crossing the Pond also chronicles the unsuccessful efforts of Nazi propagandists to exploit Native Americans for the Third Reich, as well as the successful efforts of the United States government and the media to recruit Native Americans, utilize their resources, and publicize their activities for the war effort. This research asserts that Native Americans fully intended to return to their reservations after the war, where they believed they would participate in “a better America” as the “First Americans.” Attention is also given to the postwar experiences of Native American men and women as they sought the franchise, the right to purchase alcohol, educational equality and economic stability.

This meticulously researched study utilizes oral history narratives and interviews, along with documents from the Congressional Record, papers from various state museums, collections of various tribal councils, and records from the Bureau of Indian Affairs and War Relocation Authority.

Crossing the Pond: The Native American Effort in World War II is a recommended text for use in classrooms where the following subjects are being studied: History, Military.

“Crossing the Pond” is a term Native Americans used to describe the process of being transferred overseas for military duty. This was both an event and a duty taken quite seriously by tribal members, who participated in every aspect of wartime America. The Wyoming History Journal states: “This solidly researched study provides a good overview of the World War II era of American Indian history.”

JERÉ BISHOP FRANCO lived several years in Phoenix, Arizona. As an undergraduate and a counselor with the University of Texas at El Paso Upward Bound Program, she traveled to New Mexico and visited pueblo villages, reviving her interest in native cultures. She holds a Ph.D. from the University of Arizona and has taught as a part-time lecturer at the El Paso Community College and raised four children. She lives with her husband and youngest son in El Paso, Texas.