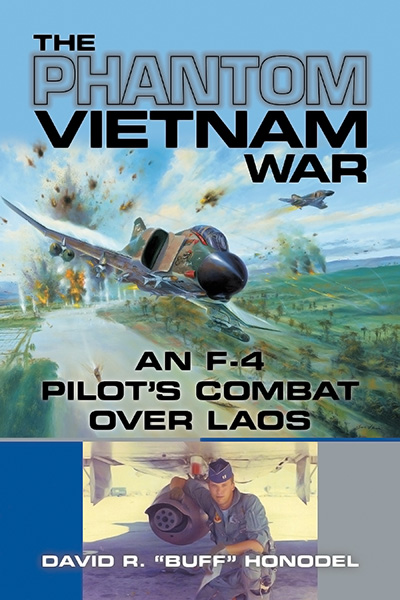 The Phantom Vietnam War: An F-4 Pilot's Combat over Laos

About Honodel's The Phantom Vietnam War

David R. “Buff” Honodel was a cocky young man with an inflated self-image when he arrived in 1969 at his base in Udorn, Thailand. His war was not in Vietnam; it was a secret one in the skies of a neighboring country almost unknown in America, attacking the Ho Chi Minh Trail that fed soldiers and supplies from North Vietnam into the South. Stateside he learned the art of flying the F-4, but in combat, the bomb-loaded fighter handled differently, targets shot back, and people suffered. Inert training ordnance was replaced by lethal weapons. In the air, a routine day mission turned into an unexpected duel with a deadly adversary. Complacency during a long night mission escorting a gunship almost led to death. A best friend died just before New Year’s. A RF-4 crashed into the base late in Buff’s tour of duty.

The reader will experience Buff’s war from the cockpit of a supersonic F-4D Phantom II, doing 5-G pullouts after dropping six 500-pound bombs on trucks hidden beneath triple jungle canopy. These were well defended by a skillful, elusive, determined enemy firing back with 37mm anti-aircraft fire and tracers in the sky. The man who left the States was a naïve, self-centered young pilot. The man who came back 137 missions later was much different.

“The Phantom Vietnam War will be the standard against which other memoirs are measured—Honodel is one hell of a good pilot and a great storyteller.” —–Earl H. Tilford, author of Crosswinds: The Air Force in Vietnam

The Phantom Vietnam War: An F-4 Pilot's Combat over Laos