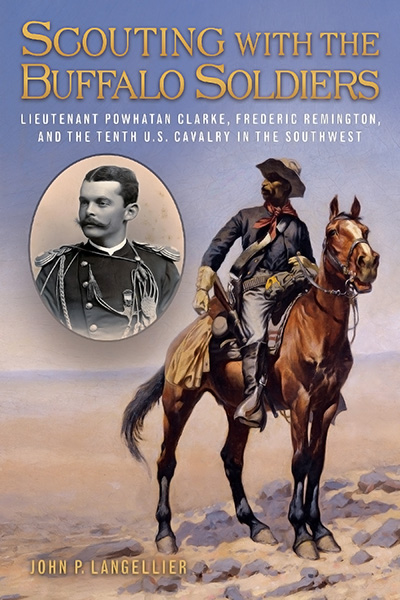 About Langellier's Scouting with the Buffalo Soldiers

On a hot summer’s day in Montana, a daring frontier cavalry officer, Powhatan Henry Clarke, died at the height of his promising career. A member of the U.S. Military Academy’s Class of 1884, Clarke graduated dead last, and while short on academic application, he was long on charm and bravado. Clarke obtained a commission with the black troops of the Tenth Cavalry, earning his spurs with these “Buffalo Soldiers.”

He evolved into a fearless field commander at the troop level, gaining glory and first-hand knowledge of what it took to campaign in the West. During his brief, action-packed career, Clarke saved a black trooper’s life while under Apache fire and was awarded the Medal of Honor. A chance meeting brought Clarke together with artist Frederic Remington, who brought national attention to Clarke when he illustrated the exploit for an 1886 Harper’s Weekly. The officer and artist became friends, and Clarke served as a model and consultant for future artwork by Remington.

Remington’s many depictions of Clarke added greatly to the cavalryman’s luster. In turn, the artist gained fame and fortune in part from drawing on Clarke as his muse. The story of these two unlikely comrades tells much about the final stages of the Wild West and the United States’ emergence on the international scene. Along the way Geronimo, The Apache Kid, “Texas” John Slaughter, and others played their roles in Clarke’s brief, but compelling drama.

“Brims with insights into daily life at the company level in the Tenth Cavalry, the late Apache wars, a Medal of Honor episode, and a compelling cross-play with the artist Frederic Remington. The included artwork makes this a Remington must-have.” —Paul L. Hedren, author of Fort Laramie and the Great Sioux War

JOHN P. LANGELLIER received his PhD from Kansas State University with an emphasis on military history. He is the author of more than twenty books, including Fighting for Uncle Sam: Buffalo Soldiers in the Frontier Army; Bluecoats: The U.S. Army in the West, 1848-1897; and Custer: The Man, the Myth, the Movies.