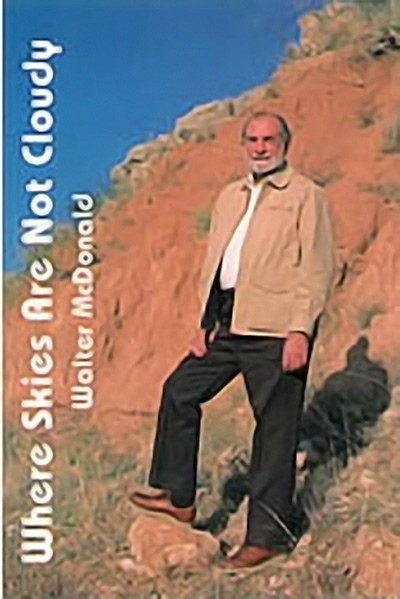 Where Skies Are Not Cloudy

About McDonald's Where Skies Are Not Cloudy

Comments about this work and some of Walt’s earlier poems:

“Seldom has a locality made such a double impact on the audience as these… poems. West Texas hits you from both sides, and you don’t forget it, ever.” —James Dickey

“Ever since discovering Walter McDonald’s work, I’ve been moved by its evocation of the spirit of his native West Texas plains.” —John Graves

“The reader is in for another rich experience in savoring these poems, all destined for frequent rereading.” —Amarillo Sunday News-Globe

In this new volume of poetry, the award-winning Texas poet who wrote Rafting the Brazos joins other poets of the plains who “tell a prairie all they hope it means, / inventing corrals and barns.”

Now it begins, oaks spinning winter
into leaves. Oiling the windmill blades,
I back to the edge and watch them spin.
Out pumps the same sweet water

from the pipe. Bracing with one stiff hand,
I squirt another drop for luck
and grab the ladder, swing out one leg
and glance around–the flat backs of Herefords

trudging to the trough, trees dense
as a windbreak, the glint of neighbors’ roofs.
Without a breeze, we’d all
be stranded without a gourd of water.

We take beguiling skies for granted
on the plains, the hands we hold from habit.
Most hours, we ignore the clatter of steel,
the mystery of wells, each other’s

steady breath. Tonight, we’ll rock
on the porch swing, hearing the bawl
of a calf, a dog barking a mile away,
the whirring blades.

Where Skies Are Not Cloudy