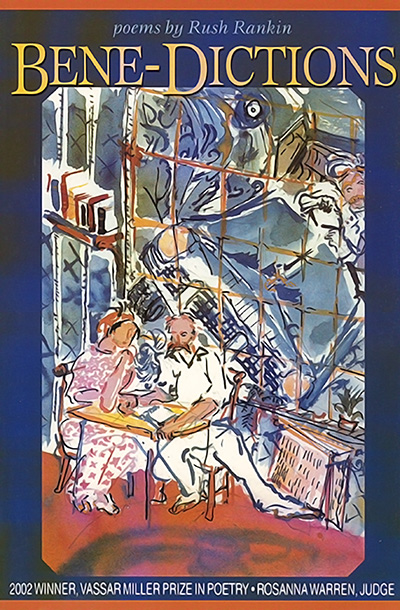 In these dramatic poems, the agon pits ideas against the lurch and drift of bodies. Both are necessary, as the hand is necessary to write the poem, and both are reconciled here by a sensitivity to the pleasures of melodic form.

The distant howling you can’t hear,
but might, the possibility of inherent
in an empty, vibrating space,
is really just a fact of life, a secret
form of noise, as when a stranger
is screaming under water.

Shy mosquitoes on the porch at dusk
probe for a patch of exposed skin,
like awkward, impatient doctors.
For the couple living together
long enough, the failure to honor
the other’s deepest longing
leaves them both stranded in a movie
that’s over, the dazed crowd
streaming out into the evening.
A life falls apart in slow motion.
You might watch the silhouettes
of birds settle in the trees at dusk.

Drained by the fever of messy sex
Augustine ignored both God and Mama
until finding in a mea culpa the logic
of a guilty pleasure. To show God
while preaching, he pointed at the sky
which was large enough to absorb
even the loudest scream in the world.

Though too pleased by solitude,
whether napping or on the porch
or reading Augustine, whether
dazed by love, or even depressed,
like Greta Garbo in dark glasses,
you still think your lover deserves
an ideal devotion. So you picture
in the future a lament, a longing,
for just this troubled past.

“Bene-Dictions is a canny, unnerving book. Its cool manners seem to hold compassion at bay; but its irony is a cleansing discipline which allows it to conjure complex lusts, hurts, and injustices without self-pity and, apparently, without delusion. These poems describe a world in which ‘Tenderness is an accident of character/ or energy, or just a side-effect/ of having failed at what you wanted,’ but in which the reader, to read the effect of rain on paper, ‘opens the book/ in a storm, as though to find the world itself in tears.’” –—Rosanna Warren, judge

“If the long hours in offices of the mind elect for us meaningfulness, they must always eventually find the human heart. Then Rankin’s vivid and surprising poems map that movement where as Rilke insists, what is sublime is mundane, and everything that falls must somehow in shadow/act, rise.” —Norman Dubie

RUSH RANKIN has published in The Failure of Grief, as well as in such journals as The Paris Review and Triquarterly. He currently teaches theory and literature at the Kansas City Art Institute.