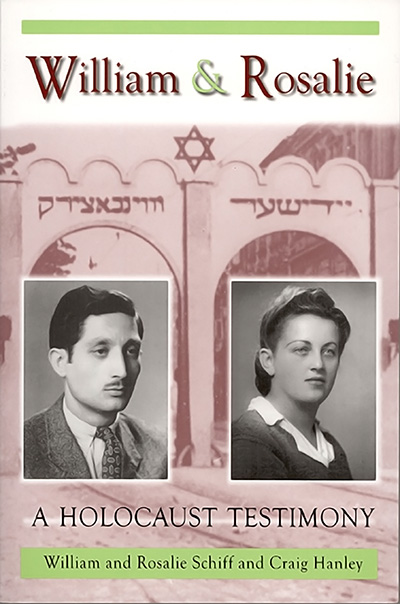 William & Rosalie is the gripping and heartfelt account of two young Jewish people from Poland who survive six different German slave and prison camps throughout the Holocaust. In 1941, newlyweds William and Rosalie Schiff are forcibly separated and sent on their individual odysseys through a surreal maze of hate. Terror in the Krakow ghetto, sadistic SS death games, cruel human medical experiments, eyewitness accounts of brutal murders of men, women, children, and even infants, and the menace of rape in occupied Poland make William & Rosalie an unusually explicit view of the chaos that World War II unleashed on the Jewish people.

The lovers’ story begins in Krakow’s ancient neighborhood of Kazimierz, after the Germans occupy western Poland. A year later they marry in the ghetto; by 1942 deportations have wasted both families. After Rosalie is saved by Oskar Schindler, the husband and wife end up at the Plaszow work camp under Amon Goeth, the bestial commandant played by Ralph Fiennes in Schindler’s List. While Rosalie is on heaven patrol removing bodies from the camp, William is working in the factories. But when Rosalie is shipped by train to a different factory camp, William sneaks into a boxcar to follow, and he ends up at Auschwitz instead.

Craig Hanley powerfully narrates the struggle of the couple to stay alive and find each other at war’s end. Now in their eighties, William and Rosalie come to terms in this book with the loss of their families and years of torture at the hands of Nazi captors. Unique among memoirs from this era, the book connects directly to the present day. The Schiffs’ ongoing and highly effective campaign against prejudice and discrimination is a heroic culmination of two lives scarred beyond belief by racism. William & Rosalie artfully combines biography with timely lessons on the nature of mass hate, a stubborn phenomenon that continues to endanger every life on Earth.

“William and Rosalie, having experienced the depth of evil and depravity, nonetheless remain committed to the task of seeking to educate against hatred. They model what is best about the human spirit. Their story deserves to be told, and passed from generation to generation.” —Alan L. Berger, Raddock Chair in Holocaust Studies, Florida Atlantic University

“Every Holocaust Survivor has stories that grip and amaze us. But together with that, William and Rosalie Schiff have a rare dedication and determination to share these with as many people as possible. Rosalie was a pampered young girl. Yet she endured years in ghastly concentration and slave labor camps to emerge a warm and loving mother and grandmother as well as a dedicated community volunteer full of optimism and hope. William survived fifteen months in Auschwitz, including a time in Dr. Mengele’s medical lab, yet he retained his indomitable spirit for life and an unshakable belief that there is but one race, the human race. Reading them is to be inspired deeply.” —Elliott Dlin Director, Dallas Holocaust Museum/Center for Education and Tolerance

“The richness of the Schiffs’ memories and the sheer intensity of their experiences record for posterity the horrors of the Holocaust.” —Booklist

“This is a riveting, harrowing, dramatic true story, the stuff of which blockbuster movies and television mini-series are made. William & Rosalie is particularly distinguished by an underlying message warning of the dangers of prejudice and ethnic hatred.” —Midwest Book Review

WILLIAM and ROSALIE SCHIFF, now both in their eighties, live in Dallas, Texas, and devote themselves full time to teaching children the dangers of prejudice and hate.

WILLIAM and ROSALIE SCHIFF, now both in their eighties, live in Dallas, Texas, and devote themselves full time to teaching children the dangers of prejudice and hate.

CRAIG HANLEY is a graduate of Harvard University. His writing appears in D Magazine.