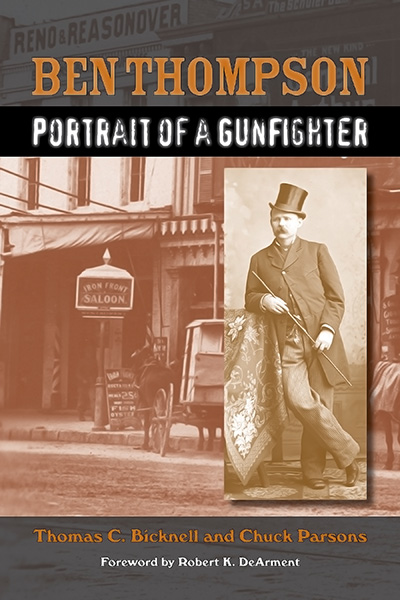 Ben Thompson: Portrait of a Gunfighter

About Bicknell and Parsons's Ben Thompson

Ben Thompson was a remarkable man, and few Texans can claim to have crowded more excitement, danger, drama, and tragedy into their lives than he did. He was an Indian fighter, Texas Ranger, Confederate cavalryman, mercenary for a foreign emperor, hired gun for a railroad, an elected lawman, professional gambler, and the victor of numerous gunfights.

As a leading member of the Wild West’s sporting element, Ben Thompson spent most of his life moving in the unsavory underbelly of the West: saloons, dance-houses, billiard halls, bordellos, and gambling dens. During these travels many of the Wild West’s most famous icons—Wyatt Earp, Doc Holliday, Bat Masterson, Wild Bill Hickok, John Wesley Hardin, John Ringo, and Buffalo Bill Cody—became acquainted with Ben Thompson. Some of these men called him a friend; others considered him a deadly enemy.

In life and in death no one ever doubted Ben Thompson’s courage; one Texas newspaperman asserted he was “perfectly fearless, a perfect lion in nature when aroused.” This willingness to trust his life to his expertise with a pistol placed Thompson prominently among the western frontier’s most flamboyant breed of men: gunfighters.

“This book is a winner.” —–Gary L. Roberts, author of Doc Holliday: The Life and Legend

THOMAS C. BICKNELL a native Chicagoan, has been studying the life of Ben Thompson for decades. His research and articles have appeared in various periodicals including True West and Wild West. CHUCK PARSONS is the author of Captain John R. Hughes and The Sutton-Taylor Feud and coauthor of A Lawless Breed, a biography of John Wesley Hardin. He lives in Luling, Texas.

Ben Thompson: Portrait of a Gunfighter