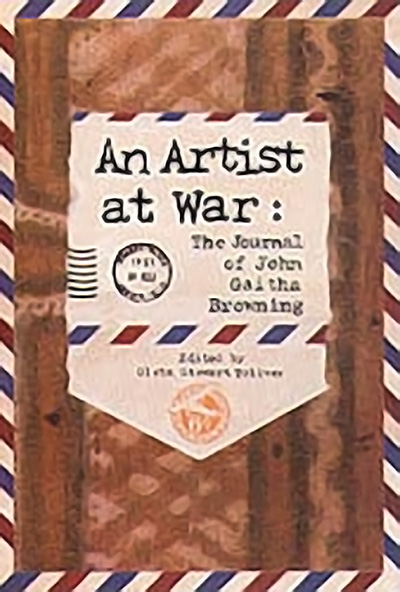 An Artist at War: The Journal of John Gaitha Browning

vol. 2: War and the Southwest Series

About Browning and Toliver's An Artist at War

When twenty-nine-year-old artist John Gaitha Browning enlisted in 1942, he was determined to keep a journal recording his observations of army life—from boot camp to combat.

“Browning was a well-known artist with a deep understanding of the Southwest and its rugged beauty. As his journal eloquently shows, he tried to find goodness and beauty everywhere, even in the Pacific during World War II.” —Dallas Morning News

He is often wryly humorous: “We figured out recently just how long it would take to get our brigade home on the so-called ‘rotation plan.’ Exactly SIX HUNDRED SIXTY-SEVEN YEARS!” More often he is philosophical, as this entry from November 11, 1943 shows: “Only tonight did I have time to realize that this is Armistice Day celebrated for over twenty-five years as the end of war… I wonder what is taking place at home now and if they are celebrating this hollow victory of a quarter century ago.”

Although his love of art and culture sometimes left him at odds with the younger soldiers, his combat experience taught him an important lesson about humanity: “I can learn something valuable by making friends with all of them. In civilian life we would never have met, but in the army we are thrown together, and both may come out wiser if we make an effort to do so.”

Journals cover from February 6, 1943, in Fort Ord, California, through his journey to Australia; his experiences there in Brisbane and Cairns and then in New Guinea; and his combat experience in the Philippines, ending June 20, 1945.

Best known as a Southwest artist, JOHN GAITHA BROWNING studied under Harry Anthony DeYoung in San Antonio and in Taos at the Joseph H. Sharp Studio.

An Artist at War: The Journal of John Gaitha Browning