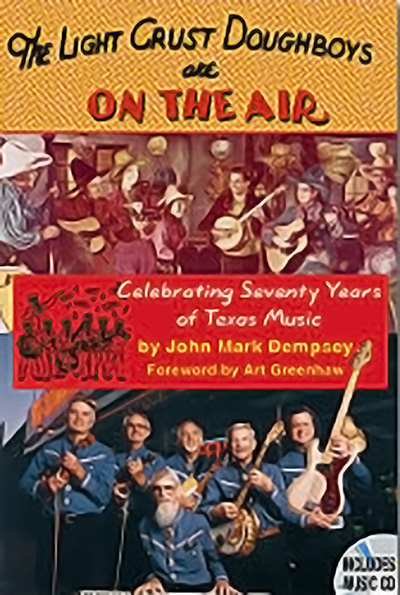 The Light Crust Doughboys Are on the Air: Celebrating Seventy Years of Texas Music

About Dempsey's The Light Crust Doughboys Are on the Air

Millions of Texans and Southwesterners have been touched over the years by the Light Crust Doughboys. From 1930 to 1952, fans faithfully tuned in to their early-morning and, later, noontime radio program, and turned out in droves to hear them play live. The Doughboys embodied the very essence of the “golden era” of radio—live performances and the dominance of programming by advertising agencies. Their radio program began as a way to sell Light Crust Flour. Their early impresario, W. Lee “Pappy” O’Daniel, quickly learned how to exploit the power of radio to influence voters, and he put that lesson to good use to become a two-time Texas governor and the model for Pappy O’Daniel in the movie, Oh Brother, Where Art Thou? But the group was more than a way to push flour; the talented musicians associated with them included Bob Wills and Milton Brown, each of whom receive credit for founding western swing.

With the demise of their regular radio program, the Light Crust Doughboys had to remake themselves. Trailblazers in western swing, the Doughboys explored many other musical genres, including gospel, for which they were nominated for Grammys in 1998, 1999, 2001, and 2002. They continue to play together with versatility and wide-ranging talent—”official music ambassadors of the Lone Star State” as declared by the state legislature in 1995. Their legendary banjo player, Smokey Montgomery, was with the group for sixty-six years before his death in 2001.

For the first time, here is the story of the Doughboys phenomenon, from their debut broadcast to their contemporary live performances. This is a rich slice of Texas musical and broadcasting history. Included inside is a bonus CD containing seventy-two minutes of Doughboys music, from early studio recordings to contemporary tunes.

“This is the most definitive work on the beginning and evolution of Western Swing music and the history of the Light Crust Doughboys that I have seen.” —James Blackwood, nine-time Grammy winner

The Light Crust Doughboys Are on the Air: Celebrating Seventy Years of Texas Music is a recommended text for use in classrooms where the following subjects are being studied: History, Texas.

This is the first-ever complete history of the Light Crust Doughboys, the “official music ambassadors of the Lone Star State” and trailblazers in western swing with Bob Wills and Milton Brown. Includes an audio CD with thirty Doughboys tunes. “This is the most definitive work on the beginning and evolution of western swing music and the history of the Light Crust Doughboys that I have seen.”—James Blackwood, nine-time Grammy winner. “As valuable to the casual fan as to any student of Texana.”—Rick Koster, Dallas Morning News

JOHN MARK DEMPSEY is assistant professor of journalism at the University of North Texas. The Greenville, Texas, native has a background in the newspaper, public relations and radio broadcasting fields, and continues to work in radio as a news announcer for the Texas State Network. He lives with his family in Denton, Texas.

JOHN MARK DEMPSEY is a native Texan and long-time admirer of the Light Crust Doughboys. His involvement in radio is also long-standing. He currently works as a newscaster for the Texas State Network and as an assistant professor of broadcast journalism at the University of North Texas. Dempsey is the editor of [The Jack Ruby Trial Revisited: The Diary of Jury Foreman Max E. Causey][] by UNT Press. Dempsey holds degrees from East Texas State University and a Ph.D. from Texas A&M. He lives in Denton, Texas.

For more information on this book and the Light Crust Doughboys, please visit http://www.thelightcrustdoughboys.com.

The Light Crust Doughboys Are on the Air: Celebrating Seventy Years of Texas Music