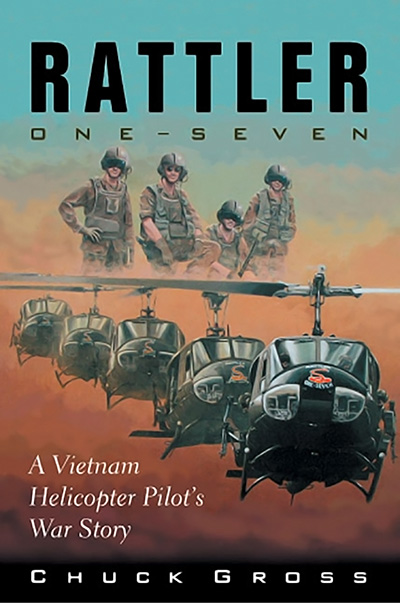 Rattler One-Seven puts you in the helicopter seat, to see the war in Vietnam through the eyes of an inexperienced pilot as he transforms himself into a seasoned combat veteran.

When Chuck Gross left for Vietnam in 1970, he was a nineteen-year-old Army helicopter pilot fresh out of flight school. He spent his entire Vietnam tour with the 71st Assault Helicopter Company flying UH-1 Huey helicopters. Soon after the war he wrote down his adventures, while his memory was still fresh with the events. Rattler One-Seven (his call sign) is written as Gross experienced it, using these notes along with letters written home to accurately preserve the mindset he had while in Vietnam.

During his tour Gross flew Special Operations for the MACV-SOG, inserting secret teams into Laos. He notes that Americans were left behind alive in Laos, when official policy at home stated that U.S. forces were never there.

He also participated in Lam Son 719, a misbegotten attempt by the ARVN to assault and cut the Ho Chi Minh Trail with U.S. Army helicopter support. It was the largest airmobile campaign of the war and marked the first time that the helicopter was used in mid-intensity combat, with disastrous results. Pilots in their early twenties, with young gunners and a Huey full of ARVN soldiers, took on experienced North Vietnamese antiaircraft artillery gunners, with no meaningful intelligence briefings or a rational plan on how to cut the Trail. More than one hundred helicopters were lost and more than six hundred aircraft sustained combat damage. Gross himself was shot down and left in the field during one assault.

Rattler One-Seven will appeal to those interested in the Vietnam War and to all armed forces, especially aviators, who have served for their country.

“Exciting reading! Chuck Gross vividly tells the dramatic account of being a combat helicopter pilot in such a way that you feel you are there. Gross sets the story of combat aviation with a graphic backdrop of chaos and carnage. Rattler One-Seven is a compelling memoir of what it was like to fly combat helicopters in Vietnam. It is a must-read for all military and aviation enthusiasts.” —Chuck Carlock, author of Firebirds

“Chuck Gross’ book tells exactly what it was like to fly a Huey slick in combat in the Vietnam War. The only things missing are the smells of gunpowder and the incredible noise as he takes the reader on combat assaults into hot landing zones.” —James Joyce, author of Pucker Factor 10

“As a helicopter pilot with combat experience in Vietnam, I could readily relate to Gross’s experiences—several of them had the hair on the back of my neck standing up! Rattler One-Seven will make an important contribution to the Vietnam War literature. There’s nothing else like it out there.” —John F. Guilmartin, Jr., Lt. Col. USAF (Ret), and professor of history, Ohio State University

“Gross’ memoir is worth reading… because of his description of the chaos and incompetence that accompanied Vietnamization… His stories should find an audience among serious collectors of books about Vietnam.” —Military History of the West

Rattler One-Seven: A Vietnam Helicopter Pilot's War Story is a recommended text for use in classrooms where the following subjects are being studied: History, Military.

Rattler One-Seven puts you in the helicopter seat, to see the war in Vietnam through the eyes of an inexperienced pilot as he transforms himself into a seasoned combat veteran. At the age of twenty, Chuck Gross spent his 1970-71 tour with the 71st Assault Helicopter Company flying UH-1 Huey helicopters. He inserted special operations teams into Laos and participated in Lam Son 719, a misbegotten attempt to assault and cut the Ho Chi Minh Trail, during which his helicopter was shot down and he was stranded in the field.

[“The Ohio State University for History 308 "The Vietnam War"”]

CHUCK GROSS was an Army helicopter pilot in the Vietnam War from May 1970 through May 1971. He logged more than 1,200 hours of combat flying and achieved Senior Aircraft Commander status. After the war he became a commercial pilot and recently retired from American Airlines as a 767/757 Captain. Gross is also an instructor in the martial arts and has published a self-defense video course. He lives in Gallatin, Tennessee.