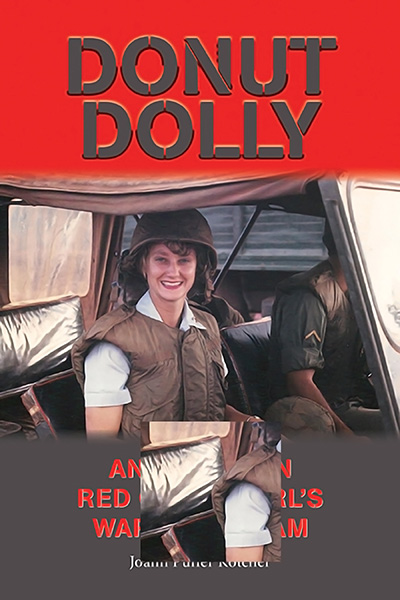 Listen to an interview with Joann Puffer Kotcher for the War and Life YouTube interview series hosted by Preston Jones of John Brown University.

Donut Dolly puts you in the Vietnam War face down in the dirt under a sniper attack, inside a helicopter being struck by lightning, at dinner next to a commanding general, and slogging through the mud along a line of foxholes. You see the war through the eyes of one of the first women officially allowed in the combat zone as a civilian noncombatant. Initially a pacifist, Joann Puffer Kotcher transforms into a combat veteran, faced with life or death decisions.

When Kotcher left for Vietnam in 1966, she was fresh out of the University of Michigan with a year of teaching, and a year as an American Red Cross Donut Dolly in Korea. All she wanted was to go someplace exciting. In Vietnam, she visited troops from the Central Highlands to the Mekong Delta, from the South China Sea to the Cambodian border. At four duty stations, she set up recreation centers and made mobile visits wherever commanders requested. That included Special Forces Teams in remote combat zone jungles. She brought reminders of home, thoughts of a sister or the girl next door. Officers asked her to take risks because they believed her visits to the front lines were important to the men. Every Vietnam veteran who meets her thinks of her as a brother-at-arms.

Donut Dolly is Kotcher’s personal view of the war, recorded in a journal kept during her tour, day by day as she experienced it. It is a faithful representation of the twists and turns of the turbulent, controversial time. While in Vietnam, Kotcher was once abducted; dodged an ambush in the Delta; talked with a true war hero in a hospital who had charged a machine gun; and had a conversation with a prostitute. She found answers to the questions: What is it really like in a war? What will a soldier say to a girl while sitting in a bunker with shells flying overhead? What did the men think about the war? Why would a man risk his life to save another? The answers will surprise you.

A rare account of an American Red Cross volunteer in Vietnam, Donut Dolly will appeal to those interested in the Vietnam War, to those who have interest in the military, and to women aspiring to go beyond the ordinary.

”[A] riveting first-hand account of Joann Puffer Kotcher’s experiences as a program director for the American Red Cross in the early years of the Vietnam War.” —Military Review

“Donut Dolly is an engaging and useful account of an almost totally ignored facet of the Vietnam War. Kotcher and her colleagues attempted to make life more bearable for the soldiers and airmen engaged in the war, and along the way her insights are fascinating.” —G. L. Seligmann, co-editor of The Sweep of American History

“Memoirs about women’s experiences in the Vietnam War are hard to come by and outnumbered by books filled with men’s combat experiences. Women’s experiences reveal an entirely different dimension of the war. The day to day interactions that Kotcher had with servicemen certainly succeeded in warming their hearts and reminding them what they were fighting for. –—Meghan K. Winchell, author of Good Girls, Good Food, Good Fun

“One day while guarding Highway 13, we had the rare pleasure of your ladies visiting us. I couldn’t believe that you would come to such a terrible place. You were a treat for us to see. We wanted to go home so bad. To see you was a blessing. You may never know how many lives you touched by coming to visit us.” —Gary W. Sergeant, C 1/28, 1st Infantry Division, Quan Loi, 1967-68

For more information about this title and the author, and to obtain signed and personalized copies, please visit the author’s website: www.donutdolly.vpweb.com

JOANN PUFFER KOTCHER, one of the first women allowed in a combat zone, graduated from the University of Michigan and lives in Michigan.