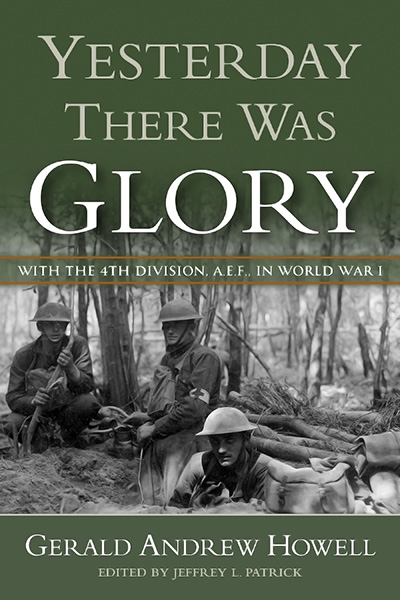 Yesterday There Was Glory: With the 4th Division, A.E.F., in World War I Gerald Andrew Howell

About Patrick's Yesterday There Was Glory

In 1946, World War I veteran and self-described “buck private in the rear rank” Gerald Andrew Howell finished a memoir of the experiences of his squad from the 39^th^ Infantry Regiment, 4^th^ Division, and their “moments of horror, tragedy, humor, amour, [and] promiscuity” in Europe. This was “the old Army as it used to be,” Howell explains—the saga of the “down-trodden doughboy.” A few months later Howell was dead, his manuscript unpublished. Jeffrey Patrick discovered the memoir and the author’s correspondence with publishers and took on the task of bringing it to publication at last.

Yesterday There Was Glory is an unpretentious account of men at war, from training camp to the occupation of Germany. It includes graphic descriptions of the battlefield, of shell fire, gas attacks, and lice. “Between the attacks the men would lay in their wet holes and pray for relief. But no relief came,” Howell remembers. He recalls much more than the horrors of combat, however, chronicling the diverse collection of heroes, professional warriors, shirkers, and braggarts that made up the American Expeditionary Forces.

Howell and his comrades longed for wounds that would allow them to escape the war, but resolutely engaged the Germans in hand-to-hand combat. They poked fun at their comrades, but were willing to share their last can of food. They endured difficult marches, pursued “mademoiselles” and “frauleins,” and even staged a “strike” to protest mistreatment by their officers. They were as “ribald as any soldiery in any army,” Howell admits, but “underneath this veneer, they were really patriotic, steadfast and sincere.”

Patrick provides an editor’s introduction and annotations to explain terms and sources in the memoir. Howell’s account preserves the flavor of army life with conversations and banter in soldier language, including the uncensored doughboy profanity often heard but seldom recorded. His is a unique record of how a typical squad of Pershing’s doughboys experienced the Great War, both on and behind the front lines.

“This is a superb memoir of a soldier’s experience and has little competition. Patrick has done an excellent job with his editorial notes. The introduction, biographical sketch, and explanations of the AEF and 39^th^ Infantry are extremely well-written.” —Mitchell Yockelson, author of Borrowed Soldiers: Americans under British Command, 1918

“This memoir helps show why the U.S. mobilization effort was so slow and irregular, offers a critical view of AEF officers and the SOS, shows the effectiveness of propaganda, shows the lack of adequate training prior to deployment and combat, offers some interesting depictions of combat, and provides good coverage of the march to and occupation of Koblenz, Germany.” —Mark Grotelueschen, author of The AEF Way of War

JEFFREY L. PATRICK is the librarian at Wilson’s Creek National Battlefield in Republic, Missouri. He holds a master’s degree in history from Purdue University and is the editor of Guarding the Border: The Memoirs of Ward Schrantz, U.S. Army, 1912-1917.

Yesterday There Was Glory: With the 4th Division, A.E.F., in World War I Gerald Andrew Howell