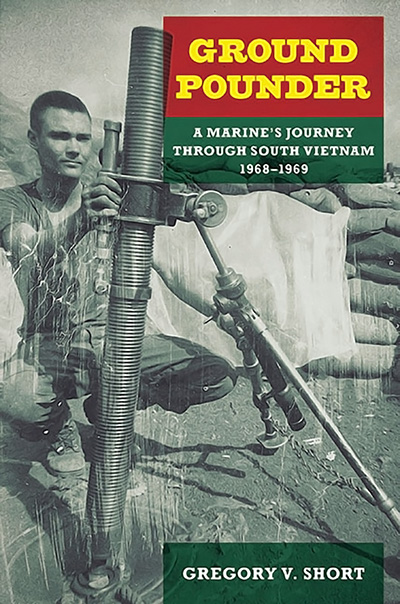 In early February of 1968, at the beginning of the Tet Offensive, Private First Class Gregory V. Short arrived in Vietnam as an eighteen-year-old U.S. Marine. Amid all of the confusion and destruction, he began his tour of duty as an 81mm mortarman with the 2nd Battalion, 1st Marine Regiment, which was stationed at Con Thien near the DMZ. While living in horrendous conditions reminiscent of the trenches in World War I, his unit was cut off and constantly being bombarded by the North Vietnamese heavy artillery, rockets, and mortars.

Soon thereafter Short left his mortar crew and became an 81mm’s Forward Observer for Hotel Company. Working with the U.S. Army’s 1st Air Cavalry Division and other units, he helped relieve the siege at Khe Sanh by reopening Route 9. Short participated in several different operations close to the Laotian border, where contact with the enemy was often heavy and always chaotic. On May 19, Ho Chi Minh’s birthday, the NVA attempted to overrun the combat base in the early morning hours. Tragically, during a two-month period, one of the companies (Foxtrot Company) within his battalion would sustain more than 70 percent casualties.

By September Short was transferred to the 1st Battalion 9th Marines (the Walking Dead). Assigned as an infantryman (grunt) with Bravo Company and operating along the DMZ and near the A Shau Valley, he would spend the next five months patrolling the mountainous terrain and enduring the harsh elements. At the end of his first tour, he re-upped for a second and was assigned to the 1st Marine Air Wing in Da Nang, where he had an opportunity to become familiar with the Vietnamese culture.

Direct, honest, and brutal in his observations, Short holds nothing back in describing the hardships of modern warfare and our leaders’ illusions of success.

“Ground Pounder is a witty, philosophical, and unflinching look at a Marine’s tour in Vietnam. Short provides a unique perspective on topics ranging from surviving in the bush to navigating the comforts and pitfalls of REMF life.” —John P. Ernst, coeditor of The War That Never Ends: New Perspectives on the Vietnam War

“An awesome account of the author’s experiences of his two tours in Vietnam… . To those of us who were not there, Short makes you feel like you were right there alongside him.” —Sgt. Grit grunt.com

GREGORY V. SHORT is a retired educator residing in Denton, Texas. With over thirty years of teaching experience, he has taught subjects in high school ranging from world, American, and Texas history to political science, economics, and physical education. He is working on a book describing civilization and economic evolution.