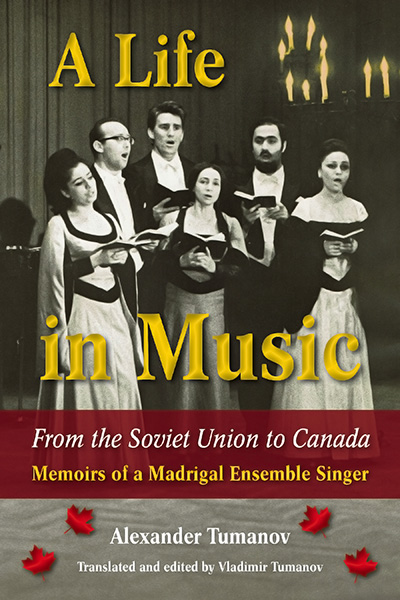 A Life in Music from the Soviet Union to Canada: Memoirs of a Madrigal Ensemble Singer

A Life in Music from the Soviet Union to Canada: Memoirs of a Madrigal Ensemble Singer - Sound Files on Digital Library.

The musical career of Alexander Tumanov extends from Stalinist and Soviet Russia through contemporary Canada, and as such provides an inspiring portrait of one person’s devotion to his art under trying circumstances. Tumanov was a founding member of Moscow’s Madrigal Ensemble of early music, which introduced Renaissance and Baroque music to the Soviet Union. The Ensemble enjoyed tremendous popularity in the 1960s and 1970s, despite occasional official disapproval by the Soviet bureaucracy. At times the compositions of the group’s founder, Andrei Volkonsky, were banned. Volkonsky eventually emigrated to escape the oppressive conditions, followed soon after, in 1974, by Tumanov, and the Madrigal Ensemble continued in a changed form under new leaders.

The story of the author’s subsequent life and career in Canada provides a poignant point of contrast with his Soviet period — at the musical, academic, and political levels. This book is a valuable resource for those interested in the history of music and intellectual life in Russia, Ukraine, and the Soviet Union in the twentieth century and is the first published book on the Madrigal Ensemble.

ALEXANDER TUMANOV was born in the Soviet Union and earned degrees in Slavic philology and music before joining the Madrigal Ensemble in Moscow. He emigrated to Canada with his family in 1974, where he completed a Ph.D. and joined the Department of Slavic and East European Studies at the University of Alberta. The author of the biography of Maria Olenina d’Alheim in both English and Russian, he currently lives in London, Ontario, Canada, with his wife Alla.

Translator and editor VLADIMIR TUMANOV holds a Ph.D. in comparative literature from the University of Alberta and teaches modern languages at Western University in London, Ontario, where he lives.

A Life in Music from the Soviet Union to Canada: Memoirs of a Madrigal Ensemble Singer