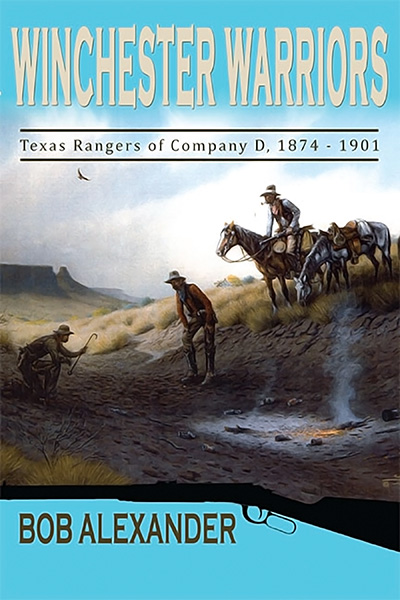 The Texas Rangers were institutionally birthed in 1874 with the formation of the Frontier Battalion. Prior to that time the “Rangers” were more or less citizen soldiers serving as circumstances demanded, but thereafter returning to the comforts of hearth and home when service in the field was no longer deemed necessary. After Reconstruction, establishment of a permanent force was the Democratic controlled legislature’s answer for how to prevent Indian incursions into the frontier settlements and deal with the lawlessness running rampant throughout Texas. The Frontier Battalion’s life spanned a period of twenty-five years to 1901, when it was officially disbanded and formally replaced by the Ranger Force.

Previous books on the Texas Rangers tend to focus on its leadership or broadly explore the history of the Rangers. Bob Alexander’s thematic approach is radically different. In an effort to put a human face on the Rangers and open the doorway for sociological commentary about the outfit, he studies one of the six companies of the Frontier Battalion, Company D. Readers are allowed to follow Rangers of Company D as—over time—it transforms from a unit of adventurous boys into a reasonably well-oiled law enforcement machine staffed by career-oriented lawmen. Beginning with their start as Indian fighters against the Comanches and Kiowas, Alexander explores the history of the Company D Rangers as they rounded up numerous Texas outlaws and cattle thieves, engaged in border skirmishes along the Rio Grande, and participated in notable episodes such as the fence cutter wars.

Winchester Warriors is an evenhanded and impartial assessment of Company D and its colorful cadre of Texas Rangers. Their laudable deeds are explored in detail, but by the same token their shameful misadventures are not whitewashed. These Texas Rangers were simply people, good and bad—and sometimes indifferent. This new study, extensively researched in both primary and secondary sources, will appeal to scholars and aficionados of the Texas Rangers and western history.

“This is a study of the Ranger force from the enlisted man’s perspective, the daily routine or grind, the strengths and weaknesses of the average individual, how they dealt with camp life, and the occasional high level of excitement contrasted with the frequent weariness of long scouts on horseback. Bob Alexander’s focus is on the everyday working Ranger rather than concentrating on the big-name Captains. It is a new and refreshing treatment.” —Chuck Parsons, author of The Sutton-Taylor Feud

“Winchester Warriors has several nicely-told stories: the tale of John Ringo, the Fusselman story, the Joe Sitter fight, the death of Capt. Jones, and that of Pvt. McKidrict. I enjoyed the high drama and tragedy of the Indian encounters. The story of the Brown County fence cutter war was nicely told, bringing the reader right into the affray. When finished, the reader will feel as if they had been there riding alongside the boys, firing away at the brigands, wrestling with the daily trials of the Texas frontier, often successful but not always. Alexander wants to tell you—just you, it feels like—a story, and a darn good one at that.” —Paul Spellman, author of Captain J. A. Brooks, Texas Ranger and Captain John H. Rogers, Texas Ranger

“Alexander uses his law enforcement background to bring new perspective to the Texas Rangers, tracing them from untrained boys into a professional crime fighting unit that has achieved international renown. He uses his experience to highlight important innovations within the Rangers, such as centralized criminal files. He fairly portrays them good, bad, and indifferent. Winchester Warriors will be setting the new benchmark for Ranger history.” —David Johnson, author of John Ringo and The Mason County “Hoo Doo” War, 1874-1902

“Winchester Warriors is Alexander’s best book, and that’s saying a lot, as he is one of our most prolific Old West authors writing today… . [1]t is the fine storytelling ability of Alexander that makes this a must buy.” —Wild West History Association Journal

“Winchester Warriors is exciting reading. It is also accurate and provides a great model for future writers of Ranger history.” —Texas Ranger Dispatch