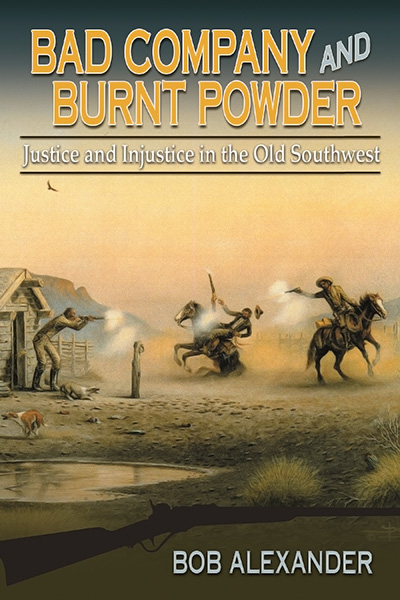 Within these pages the reader will meet a nineteen-year-old Texas Ranger figuratively dying to shoot his gun. He does get to shoot at people, but soon realizes what he thought was a bargain exacted a steep price. Another tale is of an old-school cowman who shut down illicit traffic in stolen livestock that had existed for years on the Llano Estacado. He was tough, salty, and had no quarter for cow-thieves or sympathy for any mealy-mouthed politicians. He cleaned house, maybe not too nicely, but unarguably successful he was. Then there is the tale of an accomplished and unbeaten fugitive, well known and identified for murder of a Texas peace officer. But the Texas Rangers couldn’t find him. County sheriffs wouldn’t hold him. Slipping away from bounty hunters, he hit Owlhoot Trail.

“Bob Alexander is at his best, relating lawman/outlaw tales in his breezy, colloquial style. Bob’s focus is on the outlaws and lawmen unfamiliar to most readers, although they seem as courageous and quick-triggered as many gunmen who are far better known. Scattered throughout the manuscript are such notables as Wes Hardin, Jim Miller, Bob Meldrum, Frank Hamer, and others who offer connections to a more familiar West. Alexander’s book is artfully done, filled with action and adventure.” —Bill O’Neal, State Historian of Texas and author of The Johnson-Sims Feud