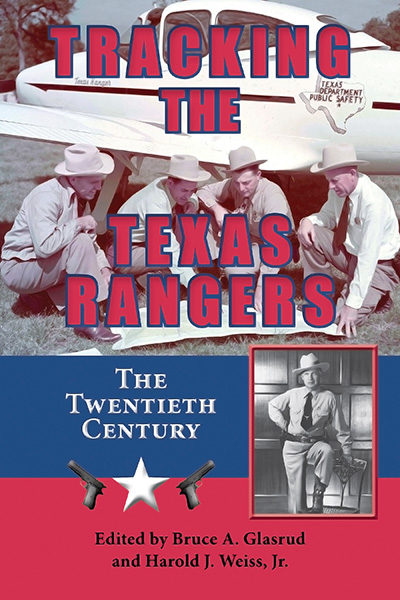 About Glasrud and Weiss's Tracking the Texas Rangers

Tracking the Texas Rangers: The Twentieth Century is an anthology of fifteen previously published articles and chapter excerpts covering key topics of the Texas Rangers during the twentieth century. The task of determining the role of the Rangers as the state evolved and what they actually accomplished for the benefit of the state is a difficult challenge. The actions of the Rangers fit no easy description. There is a dark side to the story of the Rangers; during the Mexican Revolution, for example, some murdered with impunity. Others sought to restore order in the border communities as well as in the remainder of Texas. It is not lack of interest that complicates the unveiling of the mythical force. With the possible exception of the Alamo, probably more has been written about the Texas Rangers than any other aspect of Texas history.

Tracking the Texas Rangers covers leaders such as Captains Bill McDonald, “Lone Wolf” Gonzaullas, and Barry Caver, accomplished Rangers like Joaquin Jackson and Arthur Hill, and the use of Rangers in the Mexican Revolution. Chapters discuss their role in the oil fields, in riots, and in capturing outlaws. Most important, the Rangers of the twentieth century experienced changes in investigative techniques, strategy, and intelligence gathering. Tracking looks at the use of Rangers in labor disputes, in race issues, and in the Tejano civil rights movement. The selections cover critical aspects of those experiences—organization, leadership, cultural implications, rural and urban life, and violence.

In their introduction, editors Bruce A. Glasrud and Harold J. Weiss, Jr., discuss various themes and controversies surrounding the twentieth-century Rangers and their treatment by historians over the years. They also have added annotations to the essays to explain where new research has shed additional light on an event to update or correct the original article text.

“The history of the Texas Rangers continues with this second volume of writings by esteemed historians, ably edited with an introduction and notes by Bruce Glasrud and Harold Weiss. This is an obligatory acquisition for Texas Ranger fans, historians, lawmen and lay people.” —Chuck Parsons, author of Captain John R. Hughes

“This collection is a vitally important contribution. Every top scholar in the field of modern Texas Ranger studies is well represented here. The book is thorough in offering a thematic rather than a biographical approach, and the central theme of institutional change in times of transition clearly runs through the essays like a connecting thread. Finally, it goes well beyond the apotheosis of Anglo Texans and delves deeply into the Tejano side of the Rangers’ story.” —Michael L. Collins, author of Texas Devils

“Glasrud and Weiss have created an important anthology of 21st-century perspectives on the Texas Rangers. It includes contributions and assessments by many of the leading scholars—a must for those studying the mystique of a Texas legend and an American icon.” —Byron A. Johnson, Director, Texas Ranger Hall of Fame and Museum, Waco

BRUCE A. GLASRUD is Professor Emeritus of History, California State University, East Bay; Retired Dean, School of Arts and Sciences, Sul Ross State University; and a Fellow of the Texas State Historical Association and of the East Texas Historical Association. Glasrud has published nineteen books including Buffalo Soldiers in the West and Brothers to the Buffalo Soldiers.

More from Bruce A. Glasrud