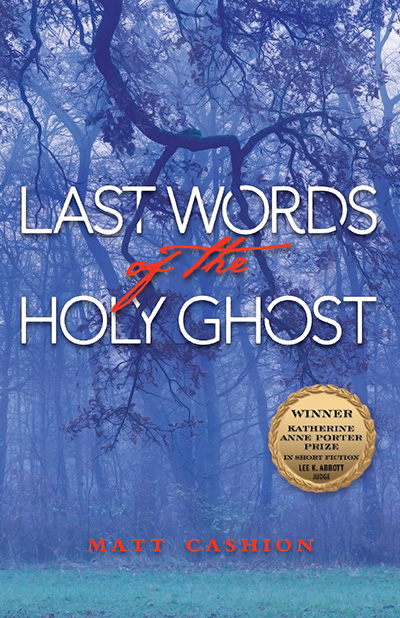 Last Words of the Holy Ghost

About Cashion's Last Words of the Holy Ghost

In 2011, Ben Sharony adapted the collection’s title story “Last Words of the Holy Ghost” into a short film; the film premiered at the Los Angeles Short Film Festival and went on to win two international awards.

Funny, heartbreaking, and real—these twelve stories showcase a dynamic range of voices belonging to characters who can’t stop confessing. They are obsessive storytellers, disturbed professors, depressed auctioneers, gambling clergy. A fourteen-year-old boy gets baptized and speaks in tongues to win the love of a girl who ushers him into adulthood; a troubled insomniac searches the woods behind his mother’s house for the “awful pretty” singing that begins each midnight; a school-system employee plans a year-end party at the site of a child’s drowning; a burned-out health-care administrator retires from New England to coastal Georgia and stumbles upon a life-changing moment inside Walmart. These big-hearted people—tethered to the places that shape them—survive their daily sorrows and absurdities with well-timed laughter; they slouch toward forgiveness, and they point their ears toward the Holy Ghost’s last words.

“In its precise prose and spooky intelligence and sharp-eyed examination of the condemned kind we are, Last Words of the Holy Ghost is an original. Listen: if you can find a collection of stories more cohesive, more ambitious in reach, more generous in its passion, and fancier in its footwork, I will buy it for you and deliver it in person. In the meantime, put some Matt Cashion between your ears and then try to resist the temptation to dash into the street and shout ‘hallelujah’ at your neighbors.” —Lee K. Abbott, author of All Things, All at Once: New and Selected Stories and judge

MATT CASHION was born in North Wilkesboro, North Carolina, and grew up in Brunswick and St. Simons Island, Georgia. He earned an MFA at the University of Oregon and now teaches at the University of Wisconsin-LaCrosse. He is the author of two novels, How the Sun Shines on Noise and Our 13^th^ Divorce. He lives in La Crosse, Wisconsin. www.mattcashion.com

Last Words of the Holy Ghost