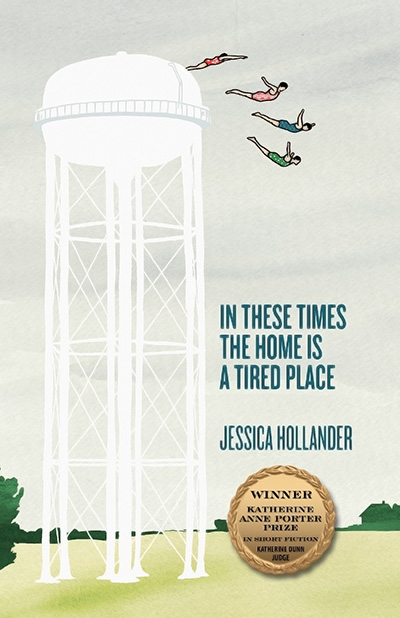 In These Times the Home Is a Tired Place

About Hollander's In These Times the Home Is a Tired Place

When an unwed pregnant woman is pressured to get married by her boyfriend, parents, and the entire culture around her, she sees a feverish intensity emanating from the path to domesticity, a “paved path shaded by thick-trunked trees, lined with trim grass and manicured mansions, where miniature houses play mailboxes and animals play lawn ornaments and people play happiness.” Jessica Hollander’s debut collection exposes a culture that glorifies and disparages traditional domesticity, where people’s confusion, apathy, and anxiety about the institutions of marriage and family often drive them to self-destruction.

The world in Hollander’s nineteen stories appears at once familiar and vividly unsettling, with undercurrents of anger and violence attached to everyday objects and spaces: a pink room is “a woman exploded,” home smells “of laundered clothes and gas from the grill,” and the sun “is so bright the sky fills with over-exposure, wilting the corners to orange, to red, to black.” Here people adopt extreme and erratic behavior: hack at furniture, have affairs with high school students, fantasize about sex with “monsters,” laden flower bouquets with messages of hate; but these self-destructive acts and fantasies feel strangely like a form of growth or enlightenment, or at least the only form that’s available to them. As characters become girlfriends, wives, husbands, and mothers, they struggle within their roles, either fighting to escape them or struggling to “play” them correctly, but always concerned with the loss of individuality, of being swallowed up by society’s expectations and becoming “a mother” or “a wife” instead of remaining themselves.

These are human tales of vigorously individual characters living with intensity. The author’s ear for revealing dialogue and double-edged humor ground these stories in a reality worth enduring. The characters connect despite suspicion and betrayal, beyond blood, circumstance or embarrassment at their own ridiculous humanity. Each piece is powered by a deep, slow boiling jubilation in the moment-to-moment, line-by-line fact of taking breath.” —Katherine Dunn, author of Geek Love and judge

“Hollander’s debut collection effectively fuses the common (childhood adventures, unhappy adults) with the bizarre (a grandmother obsessed with buttons, a gym full of people refusing to wear clothes) to create an intriguing volume… . The details in these stories ring true and are recognizable amid the insanity. A potent work from a strong new literary voice.” —Publishers Weekly starred review

In These Times the Home Is a Tired Place