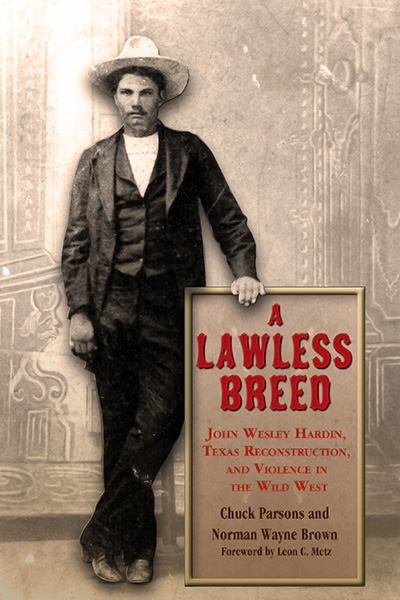 About Parsons and Brown's A Lawless Breed

John Wesley Hardin’s name spread terror in much of Texas in the years following the Civil War as the most wanted fugitive with a $4000 reward on his head. A Texas Ranger wrote that he killed men just to see them kick. Hardin began his killing career in the late 1860s and remained a wanted man until his capture in 1877 by Texas Rangers and Florida law officials. He certainly killed twenty men; some credited him with killing forty or more.

“Authors Chuck Parsons and Norman Wayne Brown have added much to the history, legend and lore of the misspent life of a premier Texas murderer. This is the best biography since Leon C. Metz penned his John Wesley Hardin: Dark Angel of Texas. Further, through their meticulous research to determine how much of Hardin’s autobiography is accurate, Parsons and Brown uncovered new sources that were not available to Metz, as well as new illustrations (Metz contributed the foreword for this book). A Lawless Breed will likely become a classic.” —True West

“Chuck Parsons and Norman Wayne Brown made an excellent choice in choosing as their subject a man who would shoot first, pray quick, and ride harder than any outlaws or lawmen in western United States history. It would seem that killing people was what John Wesley Hardin was born for.” —from the Foreword by Leon C. Metz, author of Pat Garrett and The Shooters

“Chuck and Norm have questioned everything in the Hardin autobiography, thereby adding a lot to our understanding of Hardin’s early career. Readers of gunfighter lore will embrace this fine biography, and so will Texans in general.” —Bill O’Neal, author of The Johnson-Sims Feud and Encyclopedia of Western Gunfighters

“The best known outlaw of pioneer Texas was John Wesley Hardin. Misspent as his life might have been, he was a deadly gunman and acknowledged by his contemporaries as a man who wore his emotions on his sleeve and not to be crossed. From an early age to his violent death with his boots on, he left behind a unique paper trail, including an autobiography. Parsons and Brown have dug deep in that trail and come up with a definitive biography that not only accurately tells the saga of Hardin’s life, but does it in a readable manner that puts his life in the context of the times.” —Rick Miller, author of Texas Ranger John B. Jones and the Frontier Battalion, 1874-1881 and Bloody Bill Longley

NORMAN WAYNE BROWN is retired from the U.S. Air Force and was a former Texas State Parole Officer. He has written two books and articles.