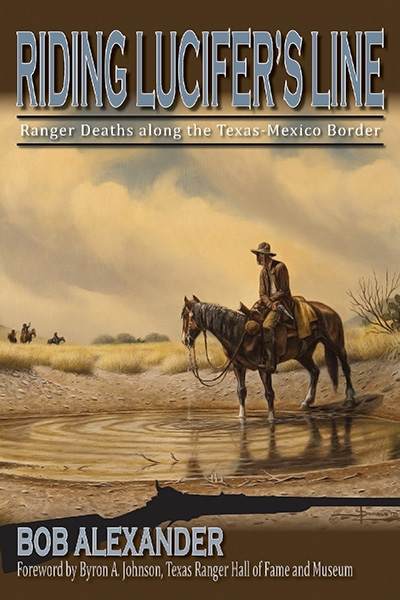 The Texas-Mexico border is trouble. Haphazardly splashing across the meandering Rio Grande into Mexico is—or at least can be—risky business, hazardous to one’s health and well-being. Kirby W. Dendy, the Chief of Texas Rangers, corroborates the sobering reality: “As their predecessors for over one hundred forty years before them did, today’s Texas Rangers continue to battle violence and transnational criminals along the Texas-Mexico border.”

In Riding Lucifer’s Line, Bob Alexander, in his characteristic storytelling style, surveys the personal tragedies of twenty-five Texas Rangers who made the ultimate sacrifice as they scouted and enforced laws throughout borderland counties adjacent to the Rio Grande. The timeframe commences in 1874 with formation of the Frontier Battalion, which is when the Texas Rangers were actually institutionalized as a law enforcing entity, and concludes with the last known Texas Ranger death along the border in 1921. Alexander also discusses the transition of the Rangers in two introductory sections: “The Frontier Battalion Era, 1874-1901” and “The Ranger Force Era, 1901-1935,” wherein he follows Texas Rangers moving from an epochal narrative of the Old West to more modern, technological times.

Written absent a preprogrammed agenda, Riding Lucifer’s Line is legitimate history. Adhering to facts, the author is not hesitant to challenge and shatter stale Texas Ranger mythology. Likewise, Alexander confronts head-on many of those critical Texas Ranger histories relying on innuendo and gossip and anecdotal accounts, at the expense of sustainable evidence—writings often plagued with a deficiency of rational thinking and common sense.

“This is Bob’s best book to date. It should attract a growing audience of Texas and Western history buffs.” —Louis R. Sadler, co-author of The Texas Rangers and the Mexican Revolution

“As in previous publications, Alexander has the ability to find interesting topics, research and document the story line, and present his findings in a readable form. Riding Lucifer’s Line is no exception, written in the popular vein with vivid characterizations. Those interested in outlaw-lawman history will be attracted to the blood-and-thunder stories.” —Harold J. Weiss, Jr., author of Yours to Command: The Life and Legend of Texas Ranger Captain Bill McDonald